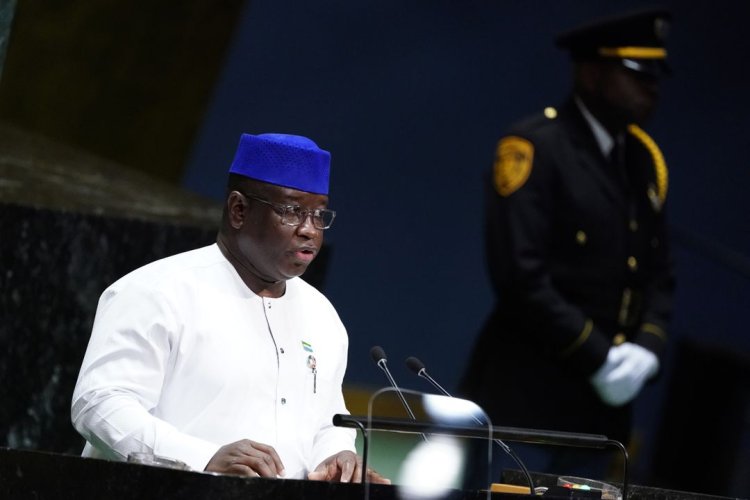 Sierra Leone’s President, Julius Maada Bio, has on Friday 8th October 2021 signed the “Abolition of Death Penalty Bill” into law after the country’s parliament unanimously voted to expunge it from the nation’s law books.

In a ceremony held at State House, President Bio said, “When I first proposed abolishing the death penalty in its totality for all capital crimes, there was widespread scepticism, cynicism, and outright hostility. Some cautioned that it was unwise to let go of the ultimate cudgel that had kept political opponents in line. Others wondered whether that was really what I wanted to do. Those who did not wish to be seen as hard dissenters made counter proposals that we could keep the death penalty for some crimes.” 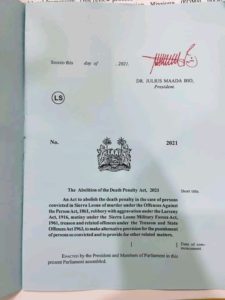 He recalled that his position has always been a ‘hard and firm No’ to the death penalty in all its forms and for all crimes.

He went on to note that the state has absolutely no obligation to undertake judicial killings of its own citizens in order to instill law and order or for political gain. “The all-too-familiar phrase of hanging persons by the neck until they die or tying persons at a stake and gunning them down is cruel, inhumane, and degrading,” he said.

He told members of the Diplomatic and Consular Corps that Sierra Leone is a civilised nation that will never again execute any person in this sovereign republic.

As President, he reiterated, “I have made a solemn commitment to good governance, justice, and to upholding, promoting, and protecting the lives and rights of every citizen. Our governance and justice sector reforms have opened up more democratic spaces, unfettered free speech, and expanded access to justice for hitherto unserved and under-served populations.”

“We will no longer execute fellow citizens for political retribution, for deterrence of crimes, or for crimes,” President Bio said, adding that, “the state must now set the example by demonstrating that it places the highest value on all human life. The abolition of the death penalty will mark an important and symbolic departure from the past to the future.”

The country’s Chief Justice Desmond Babatunde Edwards assured President Bio that the Judiciary under his watch will fully apply the Abolition of Death Penalty Act of 2021.

“We in the Judiciary note the change and are ready to apply the new law, the Abolition of the Death Penalty Act, 2021 without let or hindrance where applicable,” Hon. Justice Edwards assured.

According to him, the day marks an important date in the annals of the country’s history in that Sierra Leone will be joining over 144 countries that have abolished the Law and Practice of Death Penalty.

He said Death Penalty found its way into Sierra Leone laws courtesy of certain statutes like Murder under the Offences Against the Person Act 1861, Robbery with Aggravation under Section 23 of the Larceny Act, 1916, Mutiny under the Sierra Leone Military Forces Act, 1961 and the Law of Treason under the Treason and State Offences Act, 1963. The Hon. Chief Justice said Death Penalty was the way of life to addressing crimes like treason, murder and robbery.

Justice Edwards joking said, “I am paying tribute to the Death Penalty for after today, it would be laid to rest and would be heard of no more.”

The Deputy Minister of Justice, lawyer Umaru Napoleon Koroma, said some twenty-five years ago as a pupil of the Albert Academy, he participated in a debate in favour of the abolition of the Death Penalty; and at Fourah Bay College, University of Sierra Leone, he joined the Amnesty International to canvass for the abolition of the death penalty but it never happened.

The West African nation is the 23rd country on the continent and the 110th worldwide to end capital punishment. This is believed to favour the democratic credentials of President Bio and Sierra Leone

‘We told you we mean business’: Elated President Barrow tells thousands of citizens...