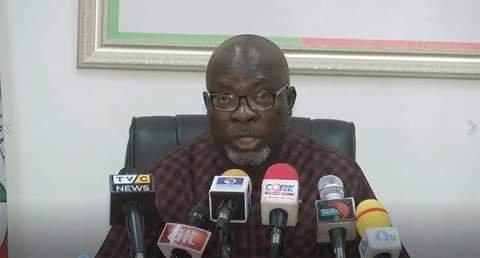 Despite the agitation by the South-east for it to allot the presidential ticket of the party to the zone in 2023, the Peoples Democratic Party (PDP) yesterday said it would not be stampeded into doing so.

According to the party, it is premature to allot the party’s ticket to any of the six geopolitical zones as the party needs to engage in consultations with all its critical stakeholders to arrive at such a decision.

Spokesman of the party, Mr Kola Ologbondiyan, spoke on The Morning Show programme of ARISE NEWS Channel, the broadcast arm of THISDAY Newspapers, against the backdrop of the moves by Ebonyi State Governor, Mr. Dave Umahi, to dump PDP for the All Progressives Congress (APC), unless the opposition party zones the ticket to the South-east, said all the organs of the party will be involved when it gets to the stage of discussions on which zone gets the party’s presidential ticket.

Umahi, who is said to be nursing a new political ambition after the expiration of his second-term tenure in 2023, has signalled his intention to defect to the APC unless the PDP zones its ticket to the South-east.

The governor is planning to move to the ruling party with his aides, including commissioners, state lawmakers and the entire party structure of the PDP in the state.

Ahead of his planned defection, the state chapter of the party and the state House of Assembly had given PDP a deadline to zone its ticket to the South-east or risk defection. The deadline has since expired.

Besides, THISDAY had exclusively reported yesterday of a lobby by prominent Nigerians for parties, especially the two dominant ones, PDP and APC, to concede the presidency to the South, irrespective of which geopolitical area of the zone gets the ticket.

Ologbondiyan, while fielding questions when he featured on The Morning Show, however, stated that Umahi’s planned defection isn’t final.

He noted that the use of the word “irrevocable” in the ongoing conversations around the matter should not arise.

He said he was present during the party’s last meeting with the governor on the issue, adding that Umahi never said his decision was irreversible.

However, Ologbondiyan admitted that during the meeting, Umahi raised some germane concerns, which the party will discuss and resolve when it gets to that stage.

He said: “PDP is a structured party. We have our various organs and it’s not a party belonging to one man from the North and one from the South. Our decision processes have a course and whatever decisions that must be taken, all the organs must be involved. We don’t act on impulse.

“We have not reached the stage of zoning of offices. Some of the things we are reading are mere speculations. The word ‘irrevocable’ as being said to have been used by Governor Umahi to the PDP that the decision is irrevocable is strange to us.

“I attended the meeting between Umahi and the PDP. There was no point the governor said his decision to leave the party was irrevocable. It’s totally incorrect. Umahi raised concerns about the South-east and tabled it before the PDP leadership.

While emphasising that the party will not be rushed into taking such an important resolution as to which zone will fly its flag in 2023, the party’s spokesman said the National Executive Committee (NEC) meeting slated for Thursday is not because of Umahi but to make positions on burning national issues.

“The party believes that the issues raised by Governor Umahi are of genuine concerns and when the time comes and all the variables are considered, the party will take its decision. PDP is not a party that can be stampeded. A decision on the number one office in the country is not one that can be taken at a sitting. We have started discussions. As we speak, we have not reached that level.

“We have three states out of five in the South-east and I have told you that it is not possible that Umahi said his decision is irrevocable. I participated in that meeting and he never used that word. The party will look at the concerns at the appropriate time,” the party spokesman added.

Ologbondiyan also pushed back on insinuations that the party was on the verge of implosion, saying that despite the “obvious theft” of the party’s victory in Imo, it continues to wax stronger.

According to him, people are leaving the APC to form a third force and may want to take some members out of the PDP and create a new political platform too. He added that the PDP remains indivisible.

The party stated that its next meeting will be centred around the state of the nation, insecurity, the fallout of the #EndSARS protests and the need to put the current government on its toe to perform.

Ologbondiyan explained: “The NEC is expected to meet once in a quarter and the meeting for Thursday is a normal NEC meeting. Before NEC meets, the BoT will meet, the caucus will meet, state chairmen will meet in order to consider all issues that are lingering as it affects the nation.

“The conversation is about our nation. For example, the #EndSARS protest has impacted the unity of our country, the insecurity is a major issue, so these are essential areas of discussion.”