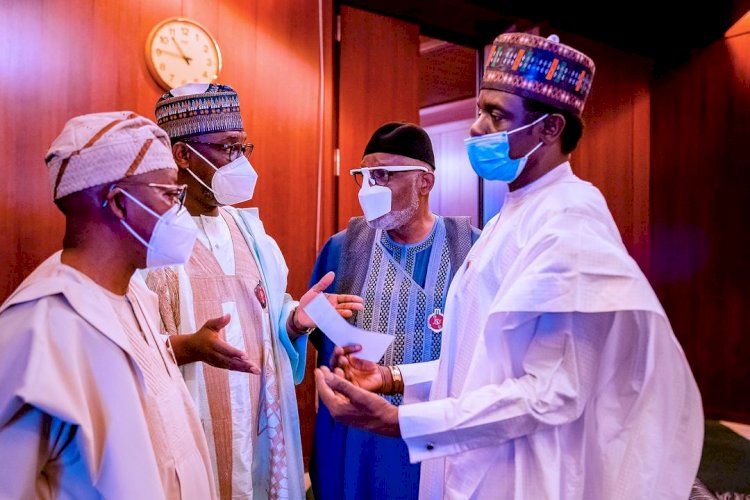 Governor Nasir El-Rufai of Kaduna State announced this on Tuesday while briefing State House reporters on the outcome of the NEC meeting in company of Governors Rotimi Akeredolu (Ondo), Hope Uzodinma (Imo), and Secretary of the CECPC, Sen. John James Akpanudoedehe.

El-Rufai said the meeting also approved the dissolution of party officials at Polling Unit, Ward, Local Government, State and Zonal levels except members of NEC who are non members of the party’s National Working Committee (NWC).

He said the NEC also endorsed the expulsion of former APC National Vice Chairman, South-South, Ntufam Hilliard Eta, for his failure to withdraw the court case instituted against the caretaker committee.

He added that the meeting had granted waivers to those who had joined the party and those wishing to follow suit in the nearest future.

El-Rufai said the NEC condemned the call for the resignation of President Buhari by the People’s Democratic Party (PDP) and their allies.

In his opening remarks, President Buhari said the caretaker committee had succeeded in bringing new atmosphere of hope to the party as many members who had earlier defected from the APC had returned while others had also declared for the party.

He said what was needed now was for party chieftains to display discipline and sustain the tempo.

The President said, “I have received periodic briefings from the caretaker extraordinary convention planning committee, as well as other leaders of the party.
I am convinced that in the last five months, since the appointment of the caretaker committee the initiatives taken have brought remarkably new atmosphere of hope in the party.

“Healthy debates are now taking place and the potential for organs of the party to affirm majority positions as the decision of the party is now possible.

“What is required now is for all of us as leaders of the party to maintain discipline and ensure that this new momentum is protected, sustained and the decisions of party organs are respected by every member.

“Despite the challenge to restore peace in the party and the series of elections at hand, the fact that we have gained more members and that we are not losing members to the opposition under the present interim leadership, indicates improvement of the party.

” In fact, we have begun to win back our members who left us and other notable political leaders are being attracted to our party.”

Buhari, while speaking on the defection of Ebonyi State Governor, David Umahi, said the development confirmed that “we are indeed making progress as a party of choice for Nigerians, as we move towards the resolution of our leadership challenges.”

Buhari appealed to party members at all levels to make sacrifices that will move the party forward.

He added, “I want to appeal to all our party members and leaders at all levels, to try and make the required sacrifices so that we are able to collectively restore our progressive and democratic political party, which can nurture and give expression to our collection dream of building a strong, united and developed Nigeria.

“May I use this opportunity to remind all of us of the need to recreate our negotiation secret of 2012, 2013 under our legacy parties. What guided our success to achieve the merger that produced the APC was the respect we were able to have for each other.

” In those times, decisions reached at both formal and informal consultations were respected with trusted initiatives taken and believed that they were needed to produce the required political platform that could guarantee electoral victory.

“Everyone of us as leaders ensured that those decisions were respected.

“I have through consultations of the caretaker committee and other leaders of the party, agree that our challenges in the party require that we take steps to rebuild the party from wards to national levels.

“The responsibility of our party’s NEC at this meeting is to adopt and dispassionately consider all proposals submitted by the caretaker committee and grant all the necessary approvals requested to rebuild the party.”

“”I believe that as leaders, our shared vision is to ensure that we are able to produce leaders that will not inherit the problems that led to the decision to desolve our last national working committee.

“”There should be no debate about the fact that we all want to have a United leadership for our party, the APC at all levels.
“We need such leaders to be able to manage big challenges that always come with elections.” the President said.

Buni, who presented to the NEC an abridged report and a few recommendations requiring approvals, said they had been able to reconcile warring factions.