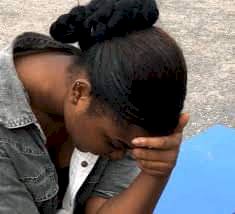 Family demands a reason for the delay in the autopsy report

Twenty–one–year–old Chidinmma Ojukwu, the  300 level Mass Communication student of the University of Lagos, who was arrested in connection with the murder of  Chief Executive Officer of Super Television, Michael  Usifo Ataga, at a Short let apartment in the Lekki area of Lagos, last month, has denied culpability in the murder saga.

Her denial which contradicts her earlier admittance to the murder of the father of two was revealed in a video that went viral yesterday.

Chidinmma in the latest interview which Vanguard gathered was conducted after she was paraded before newsmen and a standing order was given not to allow any journalist speak with her at the State Criminal Investigation and Intelligence Department, SCIID, Yaba,   stated that she had gone to get food and some drugs on that fateful day, only to meet  Usifo in the pool of his blood, dead,  on arrival.

In the interview conducted by an independent broadcaster, Chidinma, explained, “ As  I was leaving the apartment, he stood up to lock the door. When I came back,  I knocked but there was no response. I opened the door, as it wasn’t locked.

“The duvet was on the floor and pillows. The couch was facing the door and the bed was stained with blood and the floor where he was. Music was on, the TV was on. The room was in disarray like someone broke in.

“Then   I saw him on the floor,  I didn’t know what to do. I took my things.  I was afraid.  I didn’t know if I raised alarm I would be arrested because we were the only people in the room.

“ As  I was packing my things to leave, I noticed that my cloth was stained. I changed into another. I took the bag that contained his ID card, documents and bank statement.

“ I met my bag on the floor and then the ‘stuff’ he was with was on the TV set,  that was where the stuff I took was on. I just packed them and put them into the nylon and left.

“ I took his phone and the following week,  I  went out to withdraw some money from the ATM I was with. I needed N200,000. Before that day, he already told me he was going to give me the money that I requested for and when I came out, I was arrested and they were saying I made away with N5 million, there were no N5 million in the account.

“I never had anything to do with his death. I didn’t involve anybody. I don’t know who must have come into the apartment. Definitely, somebody did but I don’t who the person is. I don’t know what happened when I left to buy food”.

Earlier in her interview with journalists, while she was paraded by the  Commissioner of Police, Lagos State Police Command,  CP Hakeem Odumosu, the undergraduate said she committed the crime under the influence of roofies ( the street name for Rohypnol).  She revealed that late Usifo took three wraps while she took one,  adding that she reached out for a knife which she used to stab him, in her bit to free herself from his grip, during the ensuing altercation over forceful sex.

But in the latest interview, she said she decided to accept culpability because no one believed the true story.

“I believe that somebody knew where we were and waited till I left before they could enter. When I  confronted the security man, he said nobody entered the apartment, that it was just me.

“Knowing  I  was wrong by withdrawing money from his account and not informing the Police,  I just took the blame on myself since no one believed”, she said.

Meanwhile, the Ataga family has raised concern over the delay in the release of the autopsy report on its late son, Usifo.

Family sources who spoke with Vanguard said the Police had been promising to release the autopsy. But they wondered how soon that would be.

However, Vanguard reliably gathered that the cause of the delay was the inability of the Police to carry out a major aspect of the test known as Toxicology, in Nigeria. The test was gathered, I needed it because of Chidinma’s claim that the deceased took some drugs.

Toxicology screening is a test that determines the approximate amount and type of legal or illegal drugs taken. The test also evaluates drug intoxication or overdose.

Vanguard reliably gathered that samples are expected to be taken abroad where they would be screened and the result sent back to Nigeria.

As of two weeks ago,  samples were yet to be flown abroad. However, the command could not state whether it had sent it or no,t as of yesterday, as every policeman directly involved in the investigation declined explanation on the update.

We stole cars at gunpoint, forge Customs’ papers for buyers...