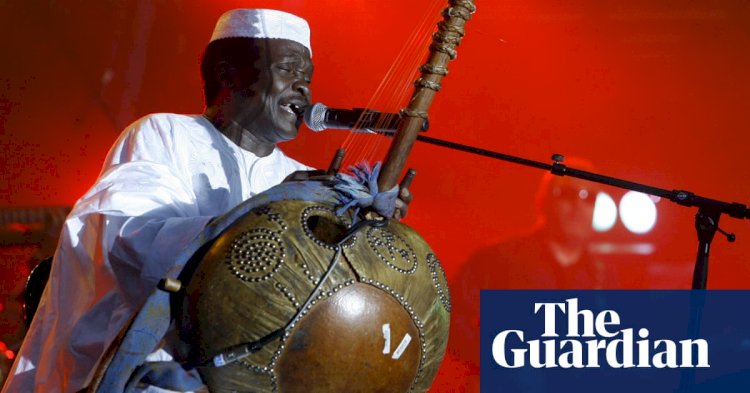 The Guinean musician Mory Kanté has died aged 70. His son Balla Kanté told the AFP news agency that his death was the result of untreated chronic health problems.

“He suffered from chronic illnesses and often traveled to France for treatment, but that was no longer possible with the coronavirus,” said Balla. “We saw his condition deteriorate rapidly, but I was still surprised because he’d been through much worse times before.” Kanté died in hospital in the capital, Conakry.
Kanté found international success in 1987 with the song Yé Ké Yé Ké. It was the first African single to sell more than 1m copies, reaching No 1 across several European countries and become a key track in Britain’s late 80s club revolution – in 2018, DJ Paul Oakenfold included the Afro Acid Mix of the track on an acid house compilation. Yé Ké Yé Ké’s parent album, Akwaba Beach, became the bestselling African record of all time and won the 1988 Victoires de la Musique prize for best Francophone album.
n a 2009 interview, he credited the song’s enduring quality to his enthusiastic spirit. “Whether you play kora, balafon or any other instrument, you have to create something that people will not soon forget. As long as your work is good, we don’t forget it.”
Senegalese musician Youssou N’Dour paid tribute, calling Kanté “a baobab of African culture”. The president of Guinea, Alpha Condé, said that African culture was in mourning and praised Kanté’s “exceptional” career. The French producer Dimitri from Paris described him as a “great music master”.
Of Malian and Guinean descent, Kanté was born in the village of Albadaria on 29 March 1950. His parents were El Hadj Djeli Fodé Kanté and singer Fatouma Kamissoko, from one of Guinea’s best-known families of musicians. Age seven, he was sent from Guinea to Bamako, Mali, to learn to play the kora, the instrument that would later make him famous. He also played balafon. In 1971, age 21, he joined the Rail Band, and later replaced Salif Keïta as the singer. Of his time in the band, he said: “We were young and careless about not thinking about money. Only perfection, perseverance and success counted.”
In the 1980s, Kanté moved to Paris. His popularity in France saw him nicknamed “the electronic griot”. He cycled through different musical styles over the subsequent decades. In the 2000s, he embraced more acoustic music, often in an orchestral setting. For his 2012 album La Guinéenne, he embraced the golden age of west African music: lyrics in the Guinean Mandinka language accompanied by zouk, funk and reggae.
Later in his career, Kanté expressed his pride that he was able to construct an entertainment complex in the village of Nongo, near Conakry, featuring a 1,500-seat auditorium, two sophisticated recording studios and leisure facilities. He also gave guest lectures at universities around the world, expanding on his interest in the industrialisation of culture.
As a solo artist, he released 13 studio albums. The last, N’Diarabi, was released in 2017. In 2014, he recorded Africa Stop Ebola alongside artists including Amadou & Mariam, Salif Keïta and Oumou Sangaré. It sold 250,000 copies, raising money for Médicins Sans Frontières.
In 2004 he said he would like to be remembered “as a man of culture, as a citizen of the world who delivers his messages in music, and as a tireless traveller looking to meet and know the people of this world”.