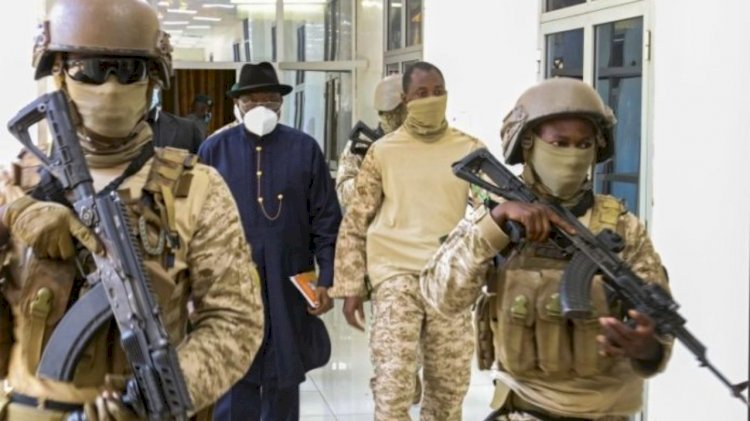 The leaders of the military coup in Mali have told a delegation of West African mediators that they want to stay in power for a three-year transition period, Nigeria said on Wednesday.
Negotiators from the Economic Community of West African States (ECOWAS) were sent to Mali at the weekend to discuss a return to civilian rule with the military officers who ousted President Ibrahim Boubacar Keita in the Aug. 18 coup.

But three days of meetings ended without a decision on the structure of a transitional government.
The junta leaders said after taking power that they acted because the country was sinking into chaos and insecurity which they said was largely the fault of poor government. They also promised to oversee a transition to elections within a “reasonable” amount of time.
The Nigerian presidency said the mutineers were now seeking to oversee a three-year transition before elections. Earlier, ECOWAS envoy Goodluck Jonathan had given an update on talks to Nigerian President Muhammadu Buhari.

“We also told them that what would be acceptable to ECOWAS was an Interim Government, headed by a civilian or retired military officer, to last for six or nine months, and maximum of 12 calendar months,” the presidency quoted Jonathan as saying in a statement.

The coup has raised the prospect of further political turmoil in Mali which, like other countries in the region, has faced an expanding threat from Islamist militants and civil unrest.
Coup leaders have held Keita since his overthrow, declining an ECOWAS request for him to be moved to his own residence.
“They said he could travel abroad, and not return to answer questions they may have for him,” Jonathan was quoted as saying.
The bloc has taken a hardline on the coup, shutting borders and halting some financial flows.

“The military leaders want ECOWAS to lift sanctions put in place, as it was already affecting the country,” it said.
Leaders of the 15-nation bloc are scheduled to hold a summit on Friday to discuss further steps.

ECOWAS to deploy stabilizing force to Guinea-Bissau after...