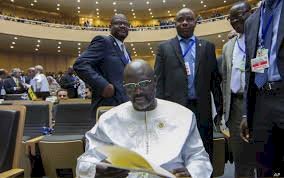 Over the past three years, Liberia have struggled with meeting up with every single report to be submitted to the AU. These reports are the core responsibilities of being a member country, some of these reports either come in later or never do, with key diplomats at the AU headquarters truly bothered about the ministry of foreign affairs in Liberia and the Minister not understanding the core function of international diplomacy, starting with the African Union.

Fingers pointing have never stopped, though the situation is pathetic and disgraceful, it is not known why it had to get thus far, the past administration of former President Ellen, left with about $800,000 united states dollars to the AU and the present administration have feared or even performed worst. These non-actions to international responsibilities, only closes the nation’s doors to benefiting and having a voice around graceful tables, most especially when we have had major scandals at the passport office in Liberia, which led to the suspension of the former Director of Passport, it has also placed the Nation’s credit rating on a downward low, limiting the capacity to borrow above a certain limit.

Former Minister Findley who is now contesting for a senate seat in the Liberian senate is said to be a major point of interet in understanding the issues which lead to this unfortunate situation, which a founder of the African union, cannot today vote on nothing and have a period upon which even the observer statues may also be lost.