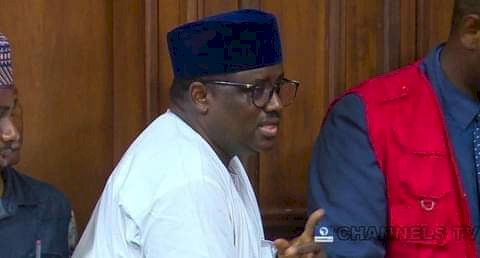 A Federal High Court in Abuja has granted leave to Mr. Adeola Adedipe representing Common Inputs Ltd. to withdraw from the money laundering case brought against the company by the Economic and Financial Crimes Commission (EFCC).

At the resumed trial in Abuja on Thursday, Justice Okon Abang in a bench ruling granted the lawyer’s application to withdraw from the case on the ground that he is yet to be paid for his services and is unable to locate Mr. Maina who engaged him to represent the company listed as the second defendant in the case.

Mr. Maina, a former Chairman of the Pension Reform Task team is being tried in absentia having jumped bail for alleged two billion naira fraud and money laundering offenses.

Senator Ali Ndume, who stood as surety for Mr. Maina was remanded in prison by a court before he was granted bail on November 27.

Mr. Maina has now been re-arrested in the Niger Republic, the Nigerian police confirmed on Tuesday.

He is expected to be extradited soon into Nigeria to continue with his trial.