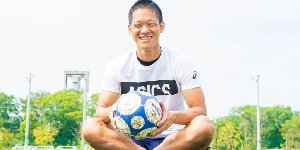 There has never been one route to greatness. Jindo Morishita’s path towards earning a first-ever call-up to Japan’s national team is not only fascinating but also pretty unusual.

Last month, the striker made history by becoming the first Japanese professional footballer to join a Ghanaian club after penning a short-term deal with Premier League side Ebusua Dwarfs.

For the 25-year-old, who previously played in Zambia, the move was a big step which draws him a step closer to realising a long-held dream.

Kukah Did Not Speak Like A Man Of God,  His Message Lacks Fairness ,   Says Presidency

Sultan of Sokoto confers traditional titles on 3 sons of Dasuki, 17 others

Ismaela Sarr stands out from Liverpool