he opening words of Assimi Goita, head of the Malian military junta: “We have no right to make mistakes” 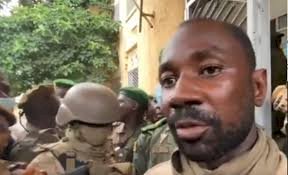 The new strongman of Bamako expressed his first words after the meeting he led with the secretaries general of the ministries this Wednesday, August 19, at the Department of Defense.

Colonel Assimi Goita assured that the objective of this meeting was to reiterate to the men and women who ensure the continuity of state services of the support of the military.

“Following yesterday’s event which resulted in the change of power, it was our duty to be able to give our position to the general secretaries so that they can work directly”, added the president of the National Committee for the Salvation of people (CNSP). He took the opportunity to discuss the reasons for the military intervention that led to President IBK’s resignation.

“Mali finds itself in a situation of socio-political security crisis … we have no room for mistakes. By making this intervention yesterday, we put the country above. Mali first, “explained the new Malian head of state.