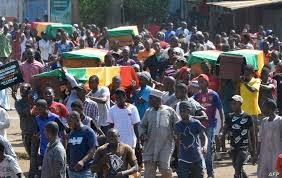 UNITED STATES, WASHINGTON (OBSERVATORY VIDEO) — Funerals for 11 people killed in protests in Guinea earlier this month have been delayed because the government has not released the bodies to the families yet.
Tens of thousands of people have been demonstrating against a possible change to the constitution that could allow President Alpha Conde to seek a third term in power.

Best Africans of all time in the Premier League: find out where Sadio Mané (Forbes)...