FULFULDE LANGUAGE TO BE INTRODUCED IN ZAMFARA STATE SCHOOLS CURRICULUM. 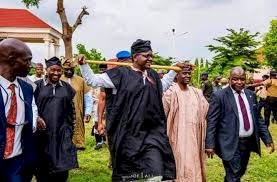 Fulfulde language to be introduced in school curriculum

……As construction of 300 hectares Ruga Settlembeginsgins in Zamfara

The Zamfara Government says it will introduce Fulfulde language in its schools’ curriculum as it kick starts the construction of 300 hectare Ruga settlements during the week.

Gov. Bello Matawalle disclosed this in Gusau when he received the state’s Ruga settlement master plan from the project consultant.

Fulfulde is the predominant language spoken by the Fulanis and spoken across some 20 countries in West and Central Africa.

The News Agency of Nigeria (NAN) reports that the governor had since announced the carving out of 100 hectares of land in each of the three senatorial districts of the state for the establishment of the pilot special modern Ruga settlement.

During the presentation of the Ruga settlement, the Emir of Mafara, Alhaji Muhammad Barmo, while speaking on behalf of the state’s Council of Chiefs, urged the state government to include the Fulani language in its the schools’ curriculum.

Barmo noted that since the Hausa and the Fulani communities were inseparable and while the Hausa language was already being taught in schools, the Fulfulde should also be taught.

Gov. Matawalle then directed the state Ministry of Education to immediately start working for the inclusion of the Fulfulde language in the schools’ curriculum.

“This will boost the use of our local languages by our upcoming generations.

“Since we have promised to establish primary and secondary schools at the new Ruga settlements, we will ensure that the local language is not forgotten,” Matawalle said.

NAN also reports that the governor had announced that the establishment of the Ruga settlement would commence during the celebration of his 100 days in office.

He said the State Government would ensure early completion of the project before the commencement of the Federal Government’s Ruga settlement programme in the state.

Matawalle promised to stock the Ruga settlement with modern ways of animal husbandry that would ensure peaceful coexistence among the inhabitants and boost their economic well being. (NAN)