Ebonyi Crisis: 55 Out Of 66 Arrested Suspects Escape From Custody 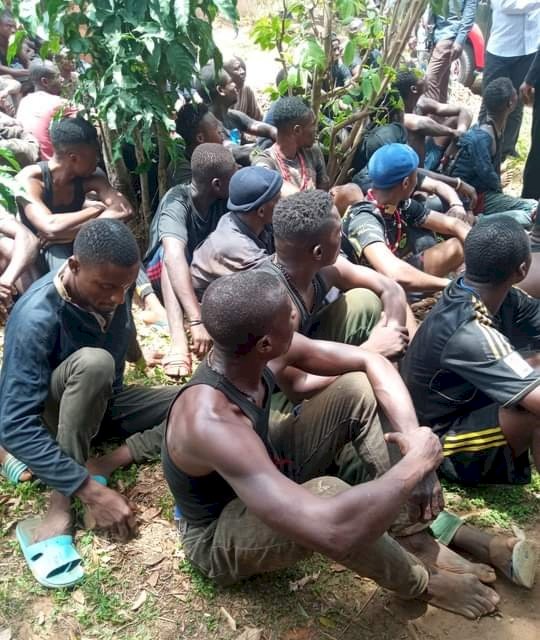 At least 55 suspects arrested on Saturday afternoon in Effium community, Ohaukwu local government area of Ebonyi State by a combined team of security services following renewed communal clashes in the area, have reportedly escaped from custody hours after their arrest.

The suspected warlords were arrested at Okpuduma village of the community with arms, dangerous weapons and charms, during a raid of the area led by the General Officer Commanding, 82 Division of the Nigerian Army, Major General Taoreen Lagbaja, witnessed by the State deputy governor, Barr. Kelechi Igwe

Gen. Lagbaja, who was on an operational visit to the area, was also accompanied by the state Commissioner of Police, Aliyu Garba, and Commissioner for Internal Security and Border Peace, Chief Stanley Okoro Emegha.

The visit was to ensure the arrest of the suspected warlords who were said to be camping in the village despite effort by security agents to fish them out and restore nomalcy in the troubled area.

Findings by LEADERSHIP show that the suspected warlords were rounded up by the security agents as guns, live cartridges and charms were recovered from them.

It was also gathered that after the arrest of the suspects, the GOC and the team proceeded to Nwekendiagu village in the community while the suspects were handed over to the Police by the GOC for onward movement to the police command headquarters in Abakaliki, the state capital.

It was also revealed that immediately the team left the community, 55 out the 66 suspects escaped from custody and their whereabouts was unknown at press time.

In an interview with the state Commissioner for Internal Security and Border Peace, Chief Stanley Emegha, he described the escape of the suspects as total sabotage on the part of the security agencies.

Emegha, who accused the security agents of conspiracy and aiding the escape of the suspects, said that the state government would be forced to use the state vigilante group to end the persistent hostilities in the area.

“Our visit today was a major breakthrough by arresting those people but very unfortunate that out of the 66, security agencies that were saddled with the responsibility of guarding those people to Abakaliki compromised, as we moved, they release them and the Governor through the Deputy Governor has demanded for an explanation from the CP and the GOC.

“The Commissioner of Police was there, he saw them. It was my insitence that those people must be arrested, that these are the warriors and they shouldn’t be allowed to stay in the community. So, it is compromise on the part of the security. The reason why we have been having this problem in Effium is because the security has been compromised. What happened this afternoon is very clear to everyone that they have compromised,” he added.

But when contacted, the state Commissioner of Police dismissed the claim that there was compromise on the part of the police.

When will Doguwa stop selective spread of federal opportunities to constituents?