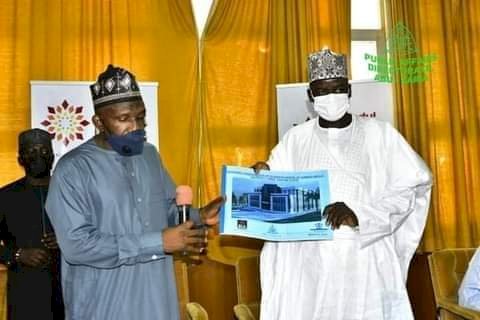 Ahmadu Bello University has secured a grant of One Billion Naira (N1bn) from The Abdul Samad Rabiu Africa Initiative (ASR Africa Initiative) for infrastructure development.
Specifically, the money is to be used for the reconstruction of Danfodio students hostel and Department of Building at Site II of the University.

The grant, according to him, was coming at a time when the ASR Africa Initiative and the 100 million dollars Annual Africa Fund for Social Development and Renewal were launched.
He explained that the initiative was expected to support various interventions in education, health and social development within Nigeria and across the rest of Africa.

Hong, also a Director in charge of Inter-Governmental Affairs at BUA Group, a business conglomerate owned by Alhaji Abdul Samad Rabiu, a Kano business mogul, said that they were happy for ABU to be the first port of call in the flag-off of this intervention.
He said that they were pleased to know that the areas needed for intervention in the University had already been identified.

The three-member team from the ASR Africa Initiative led by Dr Aliyu Idi Hong had earlier been taken round the sites at Danfodio students hostel and Site II by the Vice-Chancellor and other management members of the University. The team was later presented with the site plans for the two projects.

Receiving the team, the Vice-Chancellor, Prof Kabir Bala, expressed the institution's deepest appreciation to the founder of the ASR Africa Initiative, Alhaji Abdul Samad Rabiu, for the grant, saying ABU would remain grateful to him for the gesture.

Highway Development Management Initiative (HDMI): All You Need To Know