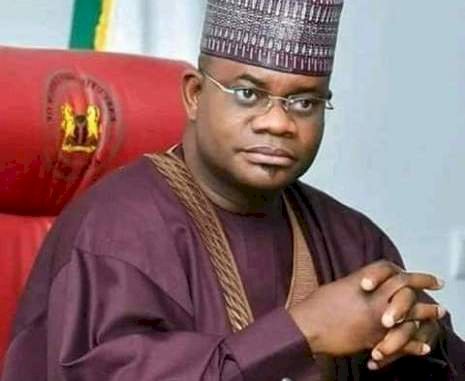 The Speaker, Kogi State House of Assembly, Prince Mathew Kolewole, is canvassing for the support of legislators across the country for Gov. Yahaya Bello’s ambition to become the President of Nigeria in 2023.

Kolawole stated this in Jos during a visit to the Speaker of the Plateau House of Assembly, Abok Ayuba and his colleagues to solicit for their support for Bello’s ambition.

He was accompanied on the visit by his Deputy, Ahmed Mohammed, and other Kogi lawmakers.

“Our mission in Plateau is to congratulate the Speaker, Plateau House of Assembly, Abok Ayuba on his election as the Chairman of North-Central zone of Speakers Conference of Nigeria.

“We are also here to brief him and canvass support for his Excellency, Alhaji Yahaya Bello, the Governor of Kogi State, who is the youngest governor in Nigeria to run for president come 2023.

“In view of our relationship with our governor, as legislators, we have articulated all his achievements in the areas of security, women empowerment, youth inclusion in government, education and infrastructure development.

“We have found him to be suitable as he has performed creditably well.

“On this note, we decided on our own, to pass a vote of confidence on him and at the same time, pass a resolution that we want him to contest for the position of the President of Nigeria.

“The youths of Nigeria are also putting pressure on him to contest for the position of the President of Nigeria and he has finally agreed,” he said.

According to him, they brought the message to Plateau Assembly being one of that states that is controlled by the All Progressives Congress (APC).

The speaker said that they believed in the association of legislators in Nigeria which had about 998 members with over 600 of them being members of APC and automatic delegates of the party.

In his remarks, Ayuba said that the Plateau lawmakers would support Bello if he set an example by granting Kogi State House of Assembly autonomy.

He said that autonomy was one of the key things that the Speakers Conference of Nigeria had been fighting for its implementation.

“As a young person, he should act differently and implement the autonomy so that others will follow.

“Sincerely, the north-central should be included in the calculations of this country as it is most times left out.

“We will tell them that we form one of the largest populations in the country and we should be considered this time,” he said.

He assured the Kogi speaker that he would convey his message to the state lawmakers when they resumed from recess on Jan. 20.

Ayuba further stated that Plateau would join hands with Kogi to get what rightly belonged to the north-central. (NAN)