As the 2023 general elections inches closer, Nigerian politicians are breaking new grounds to further their chances of achieving their aspirations.... 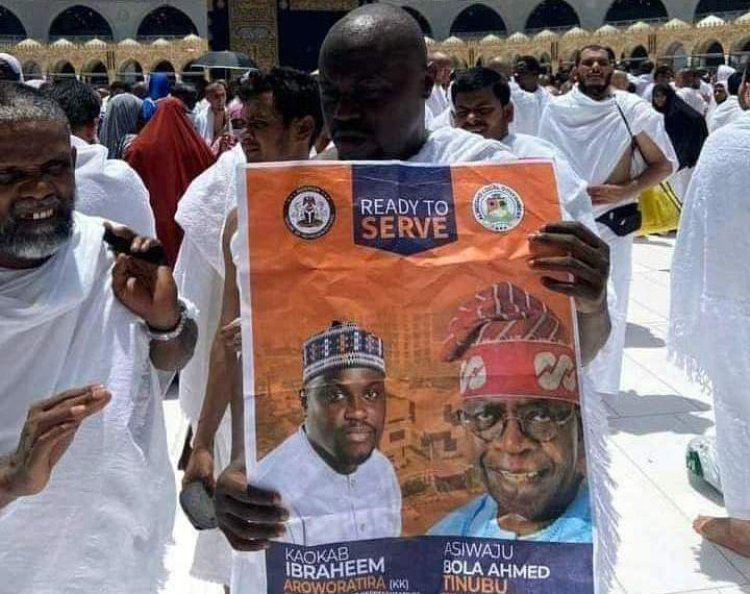 They not only visit such places personally but they also sponsor their supporters, especially clerics, to visit such holy places to pray for them. Often, such prayers are done quietly devoid of seeking public attention.

However, a new pedestal emerged during the just concluded Ramadan, when Muslims fasted for the whole month and visited the two Holy mosques in Makkah and Madinah in Saudi Arabia to seek for more divine inspiration.

The two holy sites were besieged by politicians and their supporters praying openly. In one of such incidents, supporters of APC presidential aspirant, Bola Ahmed Tinubu were seen, in a viral video, carrying his posters going round the Ka’abah and praying for his success at the polls.

Earlier in a notice issued on behalf of the Speaker, Lagos State House of Assembly, supporters were asked to converge on April 28 at King AbdulaAziz Gate at 12 noon for the special Tawaf for Bola Ahmed Tinubu.

Tagged ‘Special Tawaf for Asiwaju’, the session, according to the notice “Is to thank Allah for the former governor of Lagos ahead of the presidential election.

“We have come to seek the favour of Allah and His blessings for Asiwaju in the coming election. We are not testing Allah’s will and power but soliciting for His blessings, support and anointing because Allah is sufficient for us. We are doing this in support of Asiwaju’s presidential ambition.’’

Another viral video similarly showed supporters of Atiku Abubakar, an aspirant under the Peoples Democratic Party, also at the Ka’a bah with his posters and praying for his success.

It was also gathered that other aspirants from across the parties also sponsored clerics and supporters to pray for them at the two Holy mosques. Some of them were also in attendance.

Analysts believe things will heighten more during the forthcoming Hajj period as many will like to seize the opportunity to visit to pray for success at the polls, especially that by then, candidates for various positions must have emerged.

Other observers pointed out that this new practice of open political campaigns may draw the attention of the authorities in Saudi Arabia and may take measures to stop it.

They added that Saudi authorities have banned any political movement to carry out campaigns in the country during the hajj and umrah activities, especially at the two Holy mosques.

Speaking on the issue, a cleric at Bayero University, Kano, Dr Ibrahim Siraj, said every Muslim must accept the fact that Ka’aba is the most sacred site of Islam.

“It is for this reason that Allah rewards a person who prays two rakats 100,000 times more than those that pray the same  elsewhere. This is to tell you how important the place is in Islam.

“Also, whoever intends to commit a sin in Haram, Allah will make him taste a painful punishment because of just intending to do it, even if he does not do it, unlike in places other than the Ka’aba, wherein a person is not punished for intending to commit a sin,” he said.

He said in view of their sacredness, it has become necessary for people to behave according to the dictates of the holy places, “Any triviality or joke shouldn’t be taken there.

“However, that does not stop worshipers from going there to have a spiritual connection with Allah and pray directly to him for their wishes.

“When people are doing the Daawaf (circumambulation), they are to say things that will bring them closer to God, read Qur’an and pray for both their worldly needs and those for the hereafter.

“It’s okay when someone prays to God to give power to his favourite aspirant, whether openly or in silence but taking posters and campaigning for the aspirants is wrong and demeaning to the holiness of the holy places,” he said.

They should have prayed for abducted Nigerians

Also, the Chief Imam of Kaduna Polytechnic, Abubakar Sadiq Doka, said Haram is not a place for campaigns or any other worldly things. “It is the first house built on earth and focused on God alone, it’s a sanctuary and source of guidance, blessing to the entirety of mankind.

“So, anybody who is there, his focus should be on God alone, not on anyone living. So the supporters of these aspirants going there to display posters are trying to make a mockery of the religion.

“In fact, they don’t respect Allah as He’s ought to be respected and this has shown the intensity of distancing of some of the Muslims from Allah (SWT). Anybody close to Allah would not have the audacity to display a poster there.’’

He said those who participated in this should have spared a moment for our brothers and sisters across the country being killed and displaced by bandits and terrorists.

“They don’t care about the security situation we are in right now. Their aspiration is all that matters to them not the banditry and kidnapping bedeviling the nation,” he said.

He wondered why even with videos trending across the country on the social media some prominent scholars have refused to talk and call the perpetrators to order.

“They know some of these politicians are ignorant but they sponsor some of the clerics to Umra and Hajj to go and pray for them. So, you can see the level of neglect that is drawing us back in this society.

“Instead of praying for those people kidnapped, who have been in the hands of their abductors for the past four weeks, they are there displaying posters of aspirants, which means they don’t care and that shows the level of ungodliness in our society,” he added.

They should be sanctioned

The National Coordinator of Independent Hajj Reporters, Ibrahim Mohammad, also commenting on the issue called on relevant authorities to sanction all the people involved in taking their political campaign to the holy sites.

He also drew the attention of relevant authorities on Hajj/Umrah, especially NAHCON, SMPWBs and Private Tour Operators on the dangers of allowing pilgrims to display political posters of any kind at the holy sites.

“There is an existing law that bans pilgrims either foreign or local from publishing, displaying or distributing political related materials in the Kingdom.

“It is my hope that all concerned will enlighten their intending pilgrims and I also pray that the above posters do not cause Nigeria any penalty.”