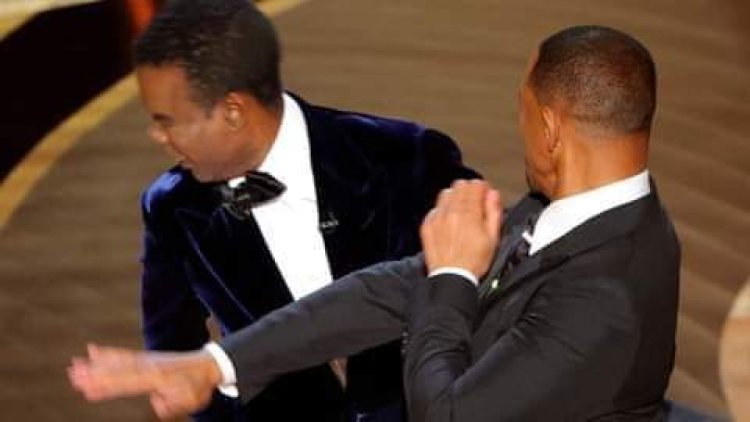 Will Smith has resigned from Hollywood's Academy of Motion Picture Arts and Sciences after he slapped Chris Rock at last Sunday's Oscars ceremony, saying he would accept "any further consequences" the organisation imposed.

In a statement, Smith said: "I have directly responded to the academy's disciplinary hearing notice, and I will fully accept any and all consequences for my conduct.

"My actions at the 94th Academy Awards presentation were shocking, painful, and inexcusable."

'I am heartbroken'
He added: "The list of those I have hurt is long and includes Chris, his family, many of my dear friends and loved ones, all those in attendance, and global audiences at home.

"I betrayed the trust of the academy. I deprived other nominees and winners of their opportunity to celebrate and be celebrated for their extraordinary work. I am heartbroken.

"I want to put the focus back on those who deserve attention for their achievements and allow the academy to get back to the incredible work it does to support creativity and artistry in film.

"So, I am resigning from membership in the Academy of Motion Picture Arts and Sciences, and will accept any further consequences the board deems appropriate.

"Change takes time and I am committed to doing the work to ensure that I never again allow violence to overtake reason."

ANALYSIS
Greg Milam - US correspondent
Will Smith evidently didn't want to spend two weeks waiting and wondering about his fate. In the words of one Oscars pundit: "He decided to rip the Band Aid off himself."

If something can be surprising and not surprising at the same time, Smith's Friday night resignation from the Academy of Motion Picture Arts and Sciences was perhaps just that. It felt like a dramatic moment but also makes complete sense.

He knew the academy's disciplinary proceedings could result in his suspension or expulsion and that there was a growing clamour for them to take significant action against him.

The academy has faced criticism for not doing more at the time of the incident. It turned out they, like the rest of the watching world, was too busy staring open-mouthed at the stage in those few chaotic moments to respond appropriately.

For their own reputation then, they need to show they mean business, even if it means punishing a newly-minted Oscar winner.

Smith undoubtedly saw the writing on the wall and his decision to resign allows him to take control of the situation and talk about the changes he needs to make in his life.

The academy process will rumble on but it is hard to see them meting out any greater punishment beyond some stern words of reprimand.

Even now, no one expects them to rescind Smith's Oscar, the first of his career, especially if they can find a way to bury one of the most shocking incidents in their 94-year history and move quietly on.

Smith's resignation means he loses his voting rights, but he can still be nominated for an Oscar and win an award for any upcoming performances.

The academy said it had accepted Smith's resignation and will "continue to move forward" with disciplinary proceedings against the 53-year-old actor for violations of its standards of conduct.

The matter is due to be discussed at the board's next meeting on 18 April, which could lead to additional sanctions.

On Sunday night, Smith walked on to the stage at the Dolby Theatre and smacked ceremony presenter Rock, who had made a joke at the expense of Smith's wife, actress Jada Pinkett Smith.

He returned to his seat and shouted twice: "Keep my wife's name out of your f****** mouth."

Rock's joke had made a reference to the 1997 film GI Jane in which actress Demi Moore shaved her head.

It was unclear whether Rock was aware that Pinkett Smith has alopecia, an autoimmune condition that causes hair loss.

Moments after hitting Rock, Smith gave a tearful speech on stage as he accepted the best actor award for his role in King Richard.

After the ceremony, he attended the Vanity Fair after-party, posing on the red carpet with his wife and three children - Trey, Jaden and Willow.

Rock, 57, declined to file charges when asked by police.

However, the Los Angeles Police Department said that "if the involved party desires a police report at a later date, LAPD will be available to complete an investigative report".
Source: Sky News