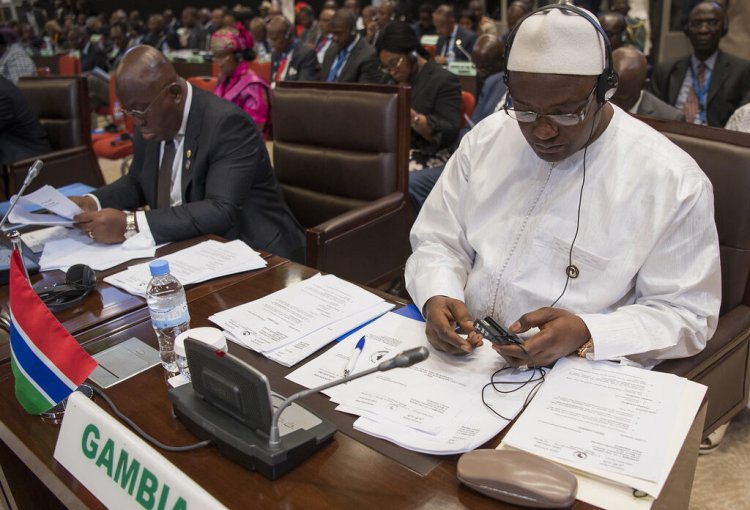 On 5 December, The Gambia’s electoral commission declared that President Adama Barrow had won re-election. The incumbent had won 53.2% of votes in the previous day’s poll. Ousainu Darboe, his main rival and former political godfather, officially received 27.7%. The opposition leader rejected the results, saying the margin of his loss based on preliminary results was “ shocking, surprising and unimaginable”.

In the previous election in 2016, Barrow shocked the world by defeating former dictator Yahya Jammeh who had been in power since 1994. In the campaign, he said he would serve for three years as a transitional leader if he won. However, once in office, he reneged on the promise. He saw out his full five-year mandate and, in December 2019, established his own party, the National Peoples Party (NPP).

In his first term, Barrow has been criticised for a stalled process of constitutional change, poor delivery of services, and increased corruption. Nonetheless, he is credited for being different from Jammeh, having ushered in democracy and brought peace and stability to the country. Many Gambians, particularly the older generation, see Barrow as a guarantor of peace. And, despite the socio-economic challenges, most voters decided to give him a second mandate that will begin in mid-January 2022.

In the lead-up to the election, The Gambia conducted voter registration from May-July 2021. The process faced some minor challenges. Two civil society groups filed a court summons concerning the legality of the Mayor of Banjul’s attestation of some voters. And there were some technical difficulties as well as rumours of the registration of underage or non-Gambian voters. However, the exercise largely went smoothly.

The nomination process was also mostly uneventful. Twenty-three candidates submitted papers, but only six were approved by the electoral commission. Two parties whose nominees were rejected challenged the decision in court and won, but still could not participate as the verdicts were too close to election day.

In 2021, the campaign period lasted over three weeks from 9 November to 2 December. In 2016, it had lasted less than two weeks. This year’s campaigning was also peaceful with the police providing security to all contestants – unlike in the past – which greatly contributed to the calmness of the poll. Former Nigeria president Olusegun Obasanjo, the head of the Commonwealth Observer Group mission, described The Gambia’s political rallies as a “carnival”.

Overall, the December election was the most credible in Gambia’s recent political history. Compared to polls under Jammeh, the playing field was relatively level and there was no significant voter intimidation. People were free to associate and openly support their favoured candidates, while the more vibrant media environment as well as social media enabled greater public participation. For the first time, parties used televised adverts and all the candidates were given free airtime on the national television station. The judiciary also played an important role in settling disagreements in the electoral process.

8% of Gambians said they believe elections are the best way to choose their leaders, and 85% said they strongly believe that polls work well to remove leaders that are not delivering. This support for electoral democracy was reflected in the remarkably high turnout of 89.3%, the highest in five decades of multiparty politics.

This was also the country’s most closely scrutinised election ever. Domestic observer groups cumulatively deployed more than 1,000 observers and established situation rooms to collate and communicate information. Five African former heads of state led international observer missions, with the European Union and other observer groups also present. The West African Elders’ Forum engaged in preventive diplomacy for the first time, and the Election Analysis Centre helped counter fake news on social media. Once again, on-the-spot counting once the polls closed, a practice first introduced in 2013, strengthened the credibility and the transparency of The Gambia’s marble system of voting.

Why Barrow was re-elected

The 2021 Gambian election was a contest between a political godfather and his prodigal son in which policy discussions were largely absent. The conflict between the two men has been evident since Darboe was fired as Vice-President in 2019, and here the rivalry reached its next level. Darboe mostly campaigned on a socio-economic transformation and anti-corruption agenda, while Barrow focused on the message of “retiring his father”. Sometimes with the use of misinformation, the incumbent portrayed his opponent as an old man whose time it is to take a bow from politics.

For many voters, the election was a referendum on President Barrow, whose first five years were centred on reform and socio-economic development, as well as a judgement of Darboe’s United Democratic Party (UDP). The biggest grouping in parliament, it has been blamed for emboldening the president and derailing the country’s transitional agenda.

In the run-up to the election, the results were expected to be close, and few people wanted to predict them. However, Barrow’s large margin of victory suggests a clear rejection of the UDP. Some analysts have argued that party has not been able to shake off Jammeh’s labelling of the party as ethnically Mandinka. This tactic was also adopted by Barrow’s campaign. For instance, Dembo “By Force” Bojang, the former UDP National President who defected to the NPP, was heard encouraging people to vote against his former party, claiming that non-Mandinka ethnic groups could be expelled from the country if Barrow were to lose power. The UDP also employed divisive rhetoric at times. For example, the deputy party leader Aji Yam Secka, who is a Banjul Wolof, has previously called on Mandinkas to rally behind Darboe because he is their kind.

Ultimately, however, it seems that a vote for Barrow represented a vote for peace and stability for many Gambians. The incumbent may not have delivered in his first term as many had hoped, but in the contest between continuity and more change, the people opted for the former.

Ultimately, however, it seems that a vote for Barrow represented a vote for peace and stability for many Gambians. The incumbent may not have delivered in his first term as many had hoped, but in the contest between continuity and more change, the people opted for the former.

Now President Barrow has been given a second term, there is ever greater pressure on him to provide efficient public services, combat corruption, and undertake the urgent institutional and legal reforms that he failed to deliver in his first term. In these areas, many are hoping that Barrow’s next five years in office will be different from his first. Gambians both inside the country and among its large diaspora will continue to play their civic role of ensuring accountability. They will also undoubtedly continue to enjoy new freedoms under Barrow, but their main concerns will still be corruption, unemployment, and the poor state of public services.