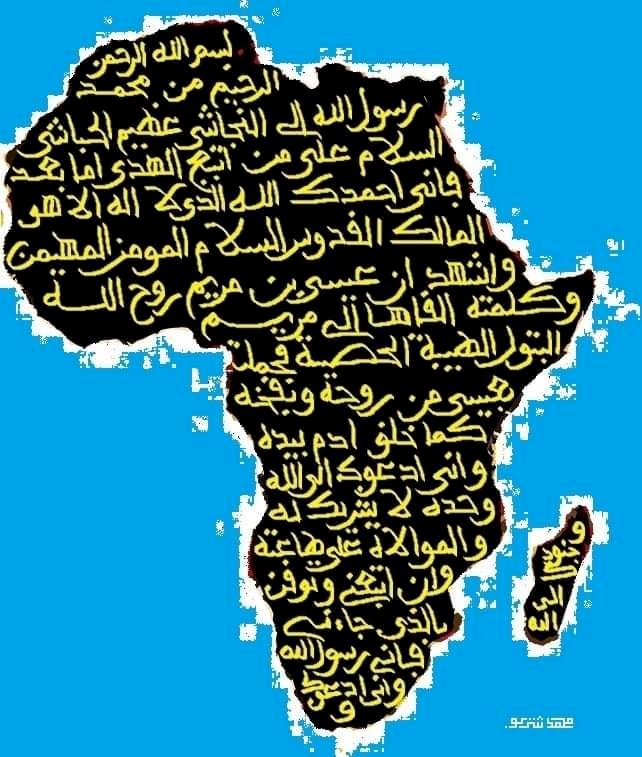 Because of the close ties between the `Arabs of the Hijaz and the Africans of Abyssinia, many of the early Muslim historians referred to the African continent and its people south of the Sahara was the cognomen ‘as-Sudan’ (taken from the Arabic word: ‘sawdaa’’, meaning ‘black’) and it referred to those lands just south of the Sahara desert from the Atlantic Ocean in the west until the Ethiopian highlands in the east. This vast region was divided by the geographers into three distinct regions: the western as-Sudan, the central as-Sudan and the eastern as-Sudan. 1

The eastern as-Sudan started from the Suakin and Tokor coast of the Red Sea and included the lands of the two Niles, (the White and the Blue) up until the western Ethiopian highlands. In fact, the western regions of the Arabian peninsular the city of Yathrib to Yemen was under the direct or indirect sovereignty of Abyssinia for centuries. The name ‘Abyssinia’ (habasha in Arabic) is said to come from the descendants of Habash ibn Kush ibn Haam ibn Nuuh, who are the traditional neighbors to the people of Yemen, and are only cut off from them by the Red Sea. Historically, the Abyssinians conquered Yemen before the time of Islam and took sovereignty over its land.

The western as-Sudan included the regions in the far west at the mouth of the Senegal River until the upper bend of the Niger River. The central As-Sudan included the lands of Hausa, the Lake Chad region up until the western Nile valley. During the Middle Ages, this region witnessed the emergence of an immense African Islamic civilization such as the kingdoms of Takruur, Ghana, Mali, Kanem-Bornu, Songhay, and the Hausa kingdoms, Wodai, Birghima and Dar Fur. Along with the emergence of high civilization the region also experienced the development of indigenous erudition and scholarship in which the histories of these kingdoms were recorded by Africans themselves in the local languages as well as in Arabic. 2

The African historians themselves applied this name to the entire region as well. Abd’r-Rahman as-Sa`di utilized the term many times in his Tarikh’s-Sudan; and he was followed in this by Mahmud Ka`ti in his Tarikh’l-Fattash.

Quoting from the al-Qamuus, Sultan Bello designated the lands of Takruur to include the lands of Dar Fur, Wodai, Birghima, Kano, Katsina, Songhay, Mali and Takruur proper. Today, Takruur, can be seen to cover the entire region which is known as the Bilad’s-Sudan and includes the entire Sahel region from the Atlantic to Jabal Marra in Dar Fur.

Later, writing in 1821 C.E., the young but erudite historian and mystic, Abd’l-Qaadir ibn Mustafa (Mallam Dan Tafa) divided the regions of West Africa into the Upper, Middle and Lower Sudan. Like Bello, Dan Tafa acknowledged that the Songhay kingdom was the last of the African kingdoms to control the greater part of West Africa. In his Rawdat’l-Afkaar he said:

"فاعلم إن بلادنا هذه السودانية ثلاثة أقسام: عوالي، ووسائط، وسوافل، فعواليها بلاد بَرْنُو وبلاد أَهِير وبلاد زَبَرْمَ وبلاد سُنْغَيْ، ووسائطها حَوسَا وهو سبعة أقاليم، وبَنْذَ وهو سبعة أقاليم، وسوافلها هي بلاد بَايْيَايْ، ولم يتم لأحد من الملوك السودانية أن يملك هذه الأقسام كلها قط، بل يملك بعضًا ويبقى بعض خارجًا عنه، وقد يكون ذلك الخارج عنه أكثر".
“Realize that these Black lands of ours are divided into three major divisions: [1] the Upper Sudan; [2] the Middle Sudan; and [3] the Lower Sudan. The Upper Sudan included the lands of Bornu, Ahir, Zaberma and Songhay. The Middle Sudan included the lands of Hausa, which are made up of seven distinct territories; as well as the ‘bastard’ regions, which are also made up of seven distinct territories The Lower Sudan are the lands of Baaiyaaya. Not one of the kingdoms of the Blacks was ever able to completely rule over all of the above mentioned regions. Rather, they were only able to rule a portion, while the greater part remained outside of their control.” 3

Abd’l-Qaadir ibn Mustafa was writing during the time of the consolidation of the last of the seven great kingdoms of West Africa, the Sokoto Uthmani Caliphate which lasted from 1804 until 1904, when the British and French divided it and consolidated their control over the entire region of West Africa. With the coming of European colonialism to the region, they divided Africa based upon a new dispensation designed to break up and prevent the reemergence of continent wide African kingdoms.

The regions under French control became known as the ‘French Sudan’ or French West Africa. Those regions under the direct or indirect rule of the British Empire became known as the British Sudan or English West Africa. The Portuguese took control of the highlands of Guinea and named it Portuguese Guinea and the Germans took control of the regions of Fombina, the southern most regions of the Sokoto Caliphate and renamed it German Cameroon. 4

The Europeans partitioned West Africa into small insignificant regions, making sure to divide regions which were once united linguistically, culturally and religiously in a homogeneous whole along new lines of division based upon the linguistic, political and in some cases spiritual divisions of the Europeans.

This assured that these artificial fault lines and divisions would be amplified long after the Europeans ended their direct colonial rule of Africa and moved to the present period of neo colonialism of ‘the take away’ and denuding of Africa resources. It took visionaries such as the two great West African scholars, Cheikh Anta Diop and Amadou-Hampate` Ba to highlight again the cultural unity of the region and the need for an African Renaissance. 5

Today, West Africa reflects these false divisions created by the European powers, but still maintain the potential for the reemergence of a homogeneous African Islamic polity in the form of united federated states from the Atlantic Ocean in the west, to the Red Sea in the east.

Today, the presence of the United States’ Afrocom military forces in Africa are there to assure that this potential is never realized. With the implosion of western economies and the resultant readjustment of geopolitical power, we will witness a resurgence of the vision of a united federated Islamic Africa that Sir Ahmadu Bello and others envisioned at the eve of the African independence movements. In my own travels from Eritrea in the east to Mali in the west, and from Niger in the north to Ilorin, in southern Nigeria, I recognized unitary homogeneous African cultures fused by the bond of Islam.