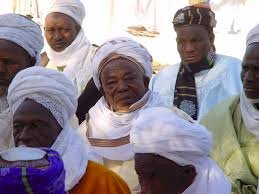 “وَيَحُثُّ رَسُولُ اللهِ صَلَّى اللهُ عَلَيْهِ وَسَلَّمَ عَلَى قَضَاءِ حَوَائِجِ الْمُسْلِمِينَ، فَإِدْخَالِ السُّرُورِ عَلَيْهِم، وَالشَّفَقَةِ عَلَى النَّاسِ وَالْحَيَوَانِ.”
“The Messenger of Allah, may Allah bless him and grant him peace would encourage people to take care of the needs of the Muslims, cause happiness to enter among them, showing compassion towards humanity and animals.”

The meaning of his words: “He, the prophet, would encourage people”; that is to say, he would urge or exhort the people (wahadu ‘n-naas) or that he would motivate them (yahraduhum): “…to take care of the needs of the Muslims”; by his words, upon him be blessings and peace in many prophetic traditions; among them being what was related by al-Bayhaqi in his Shu`b’l-Imaan on the authority of Ibn `Amr:

This prophetic tradition is related to another similar tradition where he, upon him be peace said: “When Allah desires good for a servant, He gives him understanding of the religion (yufiqqahu fee ‘d-deen).” Thus, the proof that Allah has given a person spiritual good in this life and the Next is that He first gives him deep understanding and comprehension of His religion or Way of life; He then makes them occupied in taking care of the needs of people by them transmitting to His servants the sciences of the religion.

This is why the scholar/sage is the highest of the Friends of GOD. This is because not only are they the repositories of Knowledge of GOD and His deen, but they are also refuge for those in need among the Muslims.

In a narration of ad-Daylami on the authority of Anas ibn Malik:

((إِذَا أَرَادَ اللهُ بِعَبْدٍ خَيْرًا صَيَّرَ حَوَائجَ النَّاسِ إِلَيْهِ))
“When Allah desires good for a servant, He places the needs of the people upon his shoulders.” This means that He makes their needs and requirements the responsibility of His servant. They become the gateways of His mercy and generosity on earth.

It was when our master Imam al-Hassan ibn Ali ibn Abi Talib, died, may Allah be pleased with him, that more than 50,000 poor residence in the Medina of the Prophet, realized that, he was the one who provided their daily provision. Not only are they generous in their transmission of the sciences of Iman, Islam and Ihsan; but they are those who develop and maintain institutions such as schools, colleges, hospitals, clinics, masaajid, zawiyyas and publishing houses that bring benefit and advantage to humanity in general.

It has been related by al-Khateeb also on the authority of Anas ibn Malik that he said that the Messenger of Allah, صلى الله عليه وسلم said:

The promise of forgiveness (maghfira) is an indication that the first of the spiritual states of the mureed is the state of seeking forgiveness and the first of the stations of the saalik is the station of repentance. This is evidence that taking care of the needs of others is a sound path from the Path of Tasawwuf that is more effective than constantly reciting the wazeefa and awraad.

The Messenger of Allah, upon him be blessings and peace, said: “The most beneficial of people are those who are most beneficial to the people.” Once Jesus, the son of Mary, upon them be the best blessings and most perfect peace, saw a devout sage isolated in the Temple preoccupied with worshipping and glorifying the Name of the Most High Lord. He asked the sage: “What do you do?” The sage answered: “I try and worship Allah.” Jesus, then asked: “Then who takes care of your needs, such as food?” The sage said: “It is my brother, who expends his wealth allowing me to be preoccupied with His worship.” The Messiah, Jesus, the son Mary, responded: “Then, your brother is more of a worshipper than you.”

In another narration by Ibn Abi ad-Dunya again on the authority of Anas ibn Malik that the Messenger of Allah, صلى الله عليه وسلم said:

((مَن قَضَى لِأَخِيهِ الْمُسْلِمِ حَاجَةً كَانَ لَهُ مِنْ اَلْأَجْرِ كَمَن خَدِمَ اللَّهَ عُمْرَهُ))
“Whoever fulfills a need of a Muslim will have the reward in the Hereafter like one who served Allah his entire lifetime.”
Again, this prophetic tradition is clear delineation that taking care of the outward material needs of a Muslim; illuminating the intellect of a Muslim; and making their inward lucidly clear; are paths within the Path of Tasawwuf; and are means by which the mureed and saalik can attain their Spiritual Goal.

In the narration of Ibn `Asaakir, the Prophet is reported to have said:
((مَن قَضَى حَاجَةَ الْمُسْلِمِ فِي اللَّهِ كَتَبَ اللَّهُ لَهُ عُمْرَ الدُّنْيَا سَبْعَةَ آلافِ سِنَةٍ صِيَامَ نَهَارِهِ وقِيَامَ لَيْلِهِ))
“Whoever fulfills a need of a Muslim for the sake of Allah, Allah will record for him to the extent of the age of this world, which is seven thousand years, as if he had fasted all of its days and stood in prayer all of its nights.”

These prophetic traditions prove that he upon him be blessings and peace used to persuade people to fulfill the needs of Muslims by expending their selves and their wealth in their religious and worldly affairs. The goal in this being the attainment of crystalline Knowledge of GOD.

The meaning of the words of Shaykh Abdullahi: “…cause happiness to enter among them”; is that he upon him be peace used to encourage his Companions to cause genuine joy (rakhaa’) and cheerfulness (bahja) to enter the hearts of the people, by concealing their faults (bi sitr `awraatihim), feeding the hungry among them (wa ‘ashba`a jaw`atihim), fulfilling their needs (wa qadaa lahum hawaa’ijahum) and other similar acts of praiseworthy character in serving the people.

It has been related by at-Tabaraani on the authority of Ibn Abass that the Messenger of Allah, صلى الله عليه وسلم said:

In another narration he said: “…among the believers.” This means by fulfilling a worldly requirement of his, taking care of a need of his, or removing a distress from him; as it was explicitly stated in a mursal prophetic tradition on the authority of Ibn al-Munkadir.

This prophetic tradition is similar to another Hadith Qudsi where Allah describes His Awliyya where He says on the tongue of the Messenger of Allah, may Allah bless him and grant him peace: “There is nothing more beloved to Me than my servant performing the obligations; and he increases in extra acts of worship until I love him.”

Among the extra acts of worship it not only doing the confirmed sunnan, the extra fasting, reciting the awraad and wazeefa; but it includes, as the above prophetic tradition corroborates; entering happiness and ease into the life of a Muslim. Acts of benevolence and mutual assistance are clear Paths to the stations of the Awliyya.

((مَا مِنْ مُؤْمِنٍ أدْخَلُ عَلَى مُؤْمِنٍ سَرُوْراً إِلاَّ خَلَقَ اللهُ مِن ذَلِكَ السَّرُوْرِ مَلَكاً يَعْبَدُ اللَّهَ وَيَمْجِدَهُ وَيُوَحِدَهُ، فَإِذَا صَارَ المُؤْمِنُ فِي لَحْدِهِ جَاءَ السَّرُوْرُ اَلَّذِي أَدْخِلَهُ عَلَيْهِ، فَيَقُولُ لَهُ: أَمَّا تَعْرِفُنِي؟ فَيَقُولُ: مَن أَنْتَ؟ فَيَقُولُ: أَنَا السَّرُورُ اَلَّذِي أَدْخَلْتَنِي عَلَى فُلانٍ، أَنَا اليَوْمَ أُونِسُ وَحْشَتَكَ وَأَلْقَنَكَ حُجَّتَكَ وَأَثْبَتَكَ بِالْقَولِ الثَّابِتِ، وَأَشْهَدُ بِكَ مَشْهَدَ الْقِيَامَةِ وَأَشْفَعُ لَكَ مِن رَبِّكَ وَأَرِيكَ مَنْزِلَكَ مِنَ الجَنَّةِ))
“There is no believer who causes happiness to enter the heart of another believer, except that Allah creates from that cause of happiness an Angel who worships Allah, extols Him and unifies Him. When that believer dies and is brought to his grave, that happiness which he caused to affect the believer comes and enters the grave with him. It will say to him: ‘Do you not recognize me?’ The servant will say: ‘Who are you?’ It will say: ‘I am the happiness which you caused to enter into the heart of so-and-so. This Day, I will be the intimacy which removes the alienation of the grave. I will provide you with your evidence. I will establish you with a well established word. I will bear witness for you at the scene of the Day of Judgment. I will intercede for you with your Lord, and I will show you your place in the Garden’.”

The most significant element of the above prophetic tradition is that the very act of entering happiness and joy to enter the heart of a believer; Allah creates an Angel specific due to and at the service of this single act of kindness. This Angel then performs all the awraad, wadhaa’if, adhkaar and supplications required for this generous servant of Allah.

While some people correctly believe that much remembrance of Allah with the tongue and heart and the daily maintaining of the awraad and wazeefa precisely is the key to spiritual openings; the generous and openhanded servant of Allah, has Angels that recite his awraad and adhkaar for him.

The expression ‘happiness’ (suruur) is the opposite of ‘sadness’ (huzin), thus there is no behavior superior to lifting sadness from the hearts of the believers.

Ibrahim ibn Adham, may Allah be merciful to him once said: “Causing happiness to enter the heart of a believer and fulfilling their needs, is more beloved to me than worshipping Allah one’s entire lifespan.” This is because the servant cannot achieve the perfections of saintliness (kumaal’l-wilaaya) through his worship of Allah alone; but by expending himself in the service of the poor, the destitute, widows, orphans and the strangers among the Muslims, fulfilling their needs, and giving sincere counsel to them…

When the Fulani, stigmatized, make their voices heard