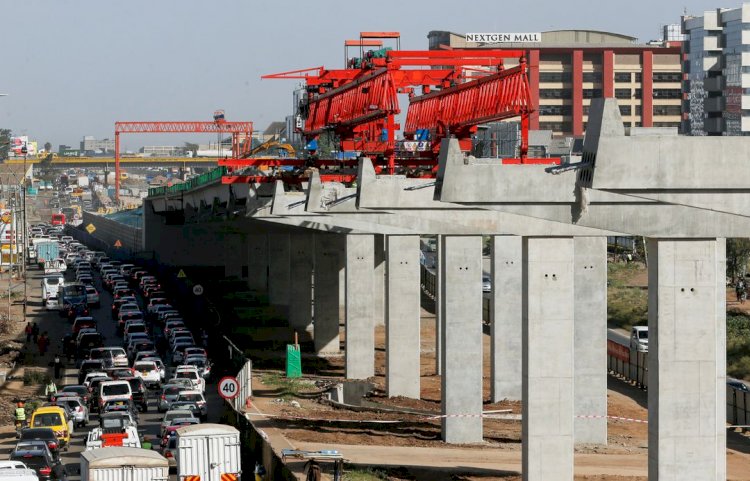 Concrete pillars are seen erected as motorists drive on the controlled diversion during the construction of the Nairobi Expressway, undertaken by the China Road and Bridge Corporation (CRBC) on a public-private partnership (PPP) basis, within Mombasa road in Nairobi, Kenya January 28, 2021. REUTERS/Thomas Mukoya

Sub-Saharan Africa is set to record the slowest economic growth of any world region this year as the continent struggles to bounce back from a pandemic-induced downturn, the International Monetary Fund (IMF) said on Thursday.

Wealthy countries must step up to ease access to vital vaccines and make financing available to Africa, where the global health crisis and its economic fallout plunged 32 million people into extreme poverty last year, the Fund said.

"Really, how the international community can help the region is by improving access to vaccines," Abebe Selassie, the head of the IMF's Africa Department, told Reuters in an interview ahead of Thursday's publication of the regional economic outlook for sub-Saharan Africa.

The continent has fallen behind much of the rest of the world in the vaccination race as countries with the financial means to reserve shots have cornered supplies. Current trends indicate few African countries will be able to make vaccines widely availability before 2023.

"But these need to be matched with financing and investment to massively scale-up the global supply of vaccines as quickly as possible," he said.

After shrinking by 1.9% last year - its worst contraction on record - sub-Saharan Africa's regional economy will grow by 3.4% in 2021, according to the regional outlook. That's well below a forecast for global growth of 5.5%. read more

Per capita output is not expected to return to 2019 levels until 2022.

Africa's rebound will be uneven. South Africa, the region's most developed economy, will grow by 3.1% following a 7% contraction last year. Oil producers Angola and Nigeria, meanwhile, will grow by 0.4% and 2.5% respectively.

Seventeen countries were in debt distress or at high risk of it last year, the IMF report stated. And employment fell by 8.5%.

At a time when governments have limited fiscal space, their needs are growing.

For most countries, vaccinating 60% of their population will require an increase of up to 50% in existing healthcare spending.

The IMF estimated additional external funding needs for the region for the 2021-2025 period at $425 billion.

But there was also a need to recognise that Africa's current difficult situation was largely due to the exogenous impact of the pandemic, he said.

"As such the international community needs to support these countries with limited capacity to be resilient," he said.

A debt service suspension initiative that was extended in December, along with a new common framework that encourages governments to defer or negotiate down external debt will help, the Fund said.

A new allocation of $650 billion worth of special drawing rights - the IMF's reserve asset - should provide around $23 billion to African governments from this summer, helping them boost liquidity and fight the pandemic.

However, work needs to be done to channel more of that allocation to low-income countries, Selassie said.

"The lion's share of the allocation is going to countries that do not necessarily have the need for this additional liquidity," he said.