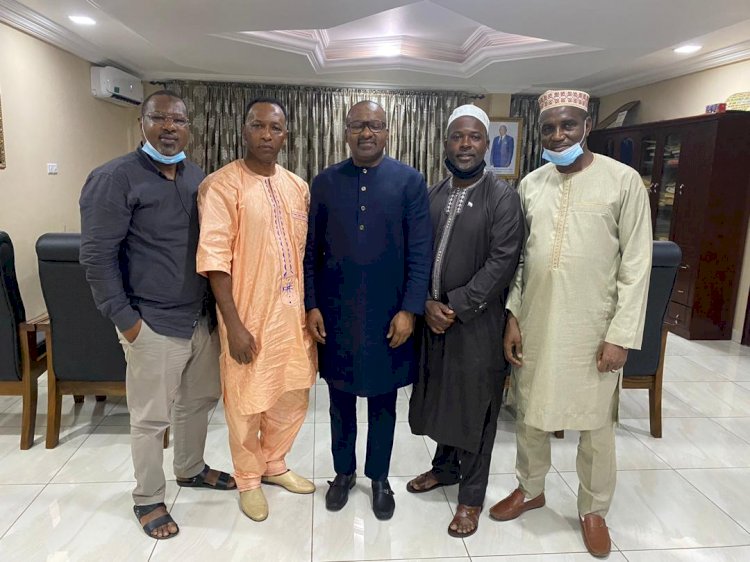 Chernor Jalloh of Dallas, Texas and Atlanta  Georgia - based Mohamed C. Bah of the 3 - Man Diaspora Masjid Steering Committee who are currently in Freetown met with the country's Second - In - Command (2IC) after receiving an  invitation extended to them to pay a traditional courtesy call.

The meeting came two days after a very colorful and successful handing over ceremony of funds contributed by the Fulbeh Diaspora towards the Rehabilitation and Expansion of the Fullah Central Mosque was held in Freetown.

Below is what the country's Vice President, Juldeh Jalloh posted (in verbatim) shortly after the meeting followed by some photos.

"Today, I met with the representatives of the Fulbe Diaspora who contributed to the rehabilitation of the Fullah Masjid in Freetown. I used the occasion to thank them and the entire Fulbe diaspora for their gesture. As I indicated, the Fullah Masjid is not only a place of worship for the Fullahs but a vivid representation of Fulbe resistance and learning in the 70’s. We owe it to our fathers and fore fathers to keep that edifice and protect its heritage. I am very proud of our Fulbe brothers and sisters that joined us in this noble endeavor. Onh Jarama."

You asked for speech, you got the speech, now you are speechless...