Guinea: The historic opponent, who embodied hope for the democratization of his country in 2010, disappoints and worries the world more and more. 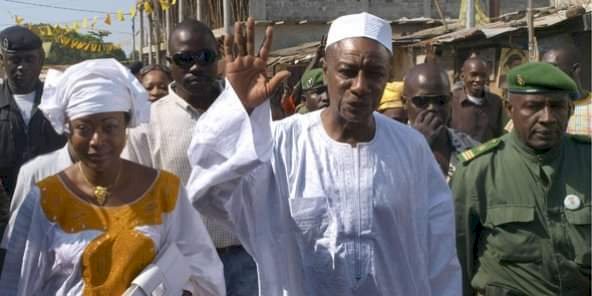 Arrest of opponents, unlawful killings of security forces, attacks on the freedom to inform, Guinea is now only a democracy.

After his contested victory in the presidential election, the Guinean head of state is accused of drifting into authoritarianism.  Arrest in the ranks of the opposition, violent repression of demonstrations.

Guinea sinks into violence.  After the disputed election of Alpha Condé to a third presidential term on October 18, the opposition was targeted by the security forces and the regime hardened considerably.  "Arrest of opponents, unlawful killings of the police, attacks on the freedom to inform, Guinea is no longer a democracy but a democrature", judge Fabien Offner, researcher at the Amnesty International office for  West and Central Africa.
Opposition figures indicted

The human rights NGO has been trying for months to alert the international community to Alpha Condé's autocratic drift.  Definitively proclaimed on November 7 by the Constitutional Court as president of Guinea for a third consecutive term at the age of 82, he is beheading his opposition.

"Four opposition figures were indicted on Monday for manufacturing and possessing weapons of war and attacking the fundamental interests of the nation," said the Amnesty researcher.  They are Cellou Baldé, Ousmane Gaoual Diallo, Abdoulaye Bah and Étienne Soropogui.  The first three are officials of the Union of Democratic Forces of Guinea (UFDG), the party led by Alpha Condé's main challenger in the presidential election, Cellou Dalein Diallo.  Étienne Soropogui had publicly called to vote for Cellou Diallo.

According to the opposition, at least 46 people were killed in the days following the presidential election by security forces.  "We are in the process of documenting this post-election violence," explains Fabien Offner.  "His level is high, the security forces shoot live ammunition at the demonstrators and they enjoy total impunity."

No gendarme and no police officer has been really worried by the Guinean justice since the police force intervened bluntly against the demonstrations of the opposition.  Abdoulaye Oumou Sow, spokesperson for the UFNDC, the second Guinean opposition platform, assures us that "all members of the movement coordination but also our grassroots branches are subject to kidnappings and threats".  According to him, government agents are hiding weapons "among the targeted people" to justify their arrests.

The conflict between the communities was, again, reactivated by the presidential election.  Among the victims of pre-election and post-electoral violence, the Fulani seem particularly numerous.  "We must handle the figures with caution on this subject," emphasizes Fabien Offner, "but it is true that if we look at the community membership of the victims whose cases we have documented, we find a majority of Fulani.  This is also due to the fact that they are rather present in the UFDG: the movement on the front line against the 3rd term of Alpha Condé and his retention in power.  "

These violence and abuses shock even among former supporters of Alpha Condé, such as the Guinean journalist Lanciné Camara, president of the Union of African Journalists.  “He's a friend, I supported him, I organized big press conferences for him, he embodied a hope for my country when he won the presidential election of 2010. I am devastated by the drift  regime, violence against journalists, civil society, the opposition, the instrumentalization of ethnic groups to keep power.  "

For his part, the Guinean president denies the accusations leveled against him.  In an interview with RFI on November 14, he assured that there had been no "witch hunts" underway in his country since his re-election.  He also rejects the accusations of his regime's anti-democratic drift: "I never said that democracy is the limitation of terms of office", he explains, citing the example of the United Kingdom or of Germany.  .