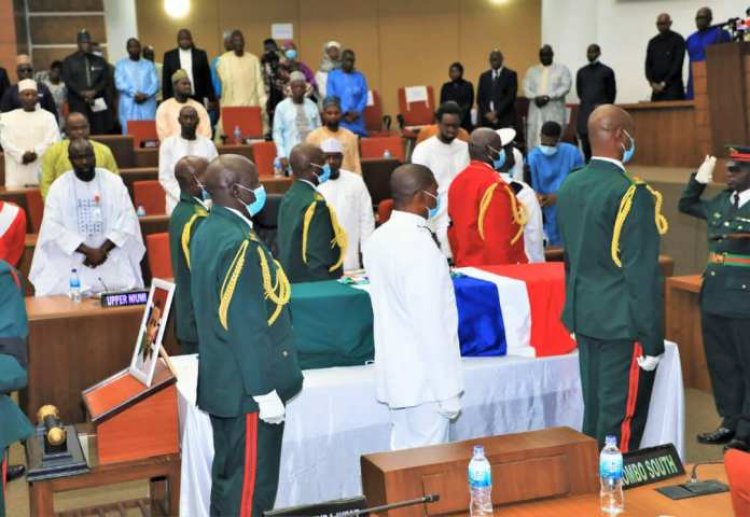 Vice President Badara Joof was laid to rest yesterday at Banjulinding after a somber and emotional ceremony at the national assembly, where, led by President Barrow, tributes poured on the late statesman.

A tearful Justice Minister Dawda Jallow recalled his mentorship under Joof while his daughter Adama sent the assembly hall to silent tears as she narrated his late father’s unbending virtues of honesty, flexibility and consultations within his family and the general community.

His neighbour and imam of his local mosque said Badara Joof was a devoted Muslim who hardly miss congregations in the mosque and was generous to the poor. He said the late vice president was also very humble.

Alpha A Khan, a respected veteran educationist said, on behalf of the family, that Badara’s influence went beyond the family.

His friend, Babou Mbye recalled that Badara was a true friend who stayed with his humility throughout his life including even when he became vice president.

President Adama Barrow closed the tributes describing Joof as a friend and brother who touched uncountable lives and influenced various institutions he served through his multifaceted character and talent.

”As the whole nation mourns, it is with a great sense of loss and a very heavy heart that I deliver this tribute in remembrance and praise of a close colleague, friend, and brother, who sadly worked as my Vice President for less than a full year when he succumbed to a brief illness,” President Barrow said. Barrow went ahead to posthumously confer the insignia of G.C.R.G to the late vice president who was later laid to rest at Banjulinding.