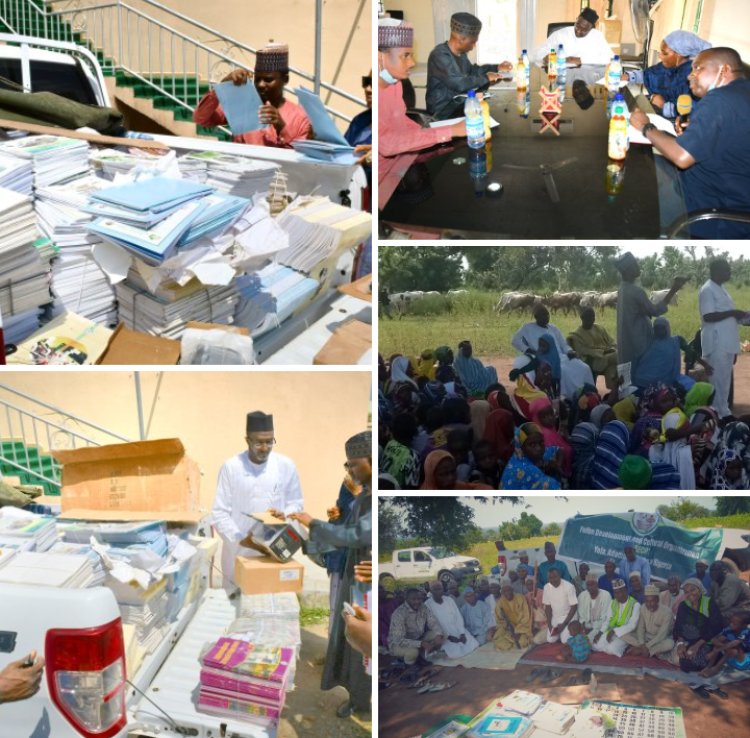 – Even the married ones will be allowed to go to school. Early marriage will be a thing of the past – Ardo Kaku 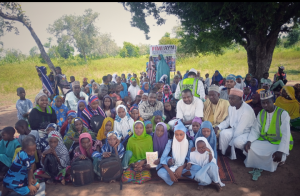 The National Commission for Nomadic Education, NCNE has visited Ardo Kaku Nomadic School where she donated 5,000 instructional materials and ten radio sets with a carton of instructional tapes to guide the teaching and learning process.

The NCNE visit was in response to the call for intervention by the Fulbe Development and Cultural Organisation, FUDECO, Adamawa state that established the school and funded by the International Indigenous Women Forum, FIMI- AYNI, published in the Periscope Global, joined by other online media. 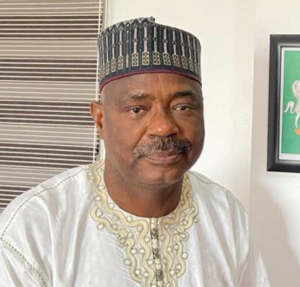 In an exclusive interview with the Periscope Global Publishers three days ago, the Executive Secretary, Prof Bashir Haruna Usman, has promised that NCNE would intervene in the progress and development of the school.

“Your news report on Ardo Kaku nomadic school in a Fulani settlement at a village in Fufore local government area of Adamawa state, established by an NGO called FUDECO, will be given desired attention. The Commission is currently working out the possibilities for intervention,” the Executive Secretary assured during the interview.

The intervention has indeed came as a great expectation. The Commission has not only acted promptly with the donation, she has paid a two-day visit to FUDECO Adamawa office in Yola and to inspect the Ardo Kaku Nomadic School in Mayo-Ine village of Fufore local government. 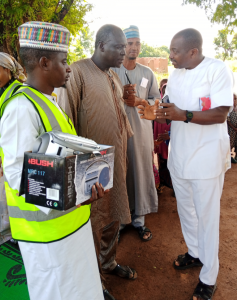 Represented by the Director, Social Mobilisation and Women Development of the Commission, Mr Fidelis Idoko and the Personal Assistant to the Executive Secretary, Malam Lawal Abubakar Boro, Prof Bashir the Executive Secretary commended the coordinator FUDECO Adamawa state for establishing the nomadic school, the Adamawa State Universal Basic Education Board, ADSUBEB Yola represented by the Education Secretary, Fufore local government for granting permission, the officials of the nomadic education in Fufore and Mayo-Belwa local governments for the support, the village head, Ardo Kaku Galadima, whom the school is named after, and the entire community, the dedicated teacher and the gentlemen of the press. 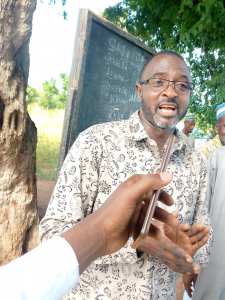 Prof Bashir said the Commission has made the donation of 5,000 instructional materials as the first immediate intervention. It was also an inspection visit to determine the possibility of having block of classrooms, head teacher and teachers’ offices.

Prof Bashir has called on the parents to let their daughters the opportunity to acquire knowledge, rather than engage them in early marriage.

The FUDECO Coordinator, Adamawa state, Hajiya Jamila Hassan, thanked the NCNE for a rather prompt response with a huge donation considered as great expectation. 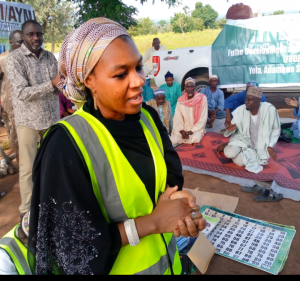 Hassan has commended the Ardo Kaku community for the unflinching support and cooperation, where she revealed that the school was started with just thirty students. It has now grown to 188 students capacity. She commended the teacher for his commitment and dedication to selfless service.

Mr. Danus Kemuel Nyaru the lone teacher who is also serving as the head teacher, presented his pupils and they dazzled the visitors; they could greet and respond to greetings in English, they recited letters A to Z and counted numbers 1 to 100 rather effortlessly, among other activities. 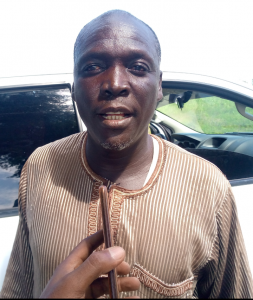 Nyaru said the pupils, mostly females, were able to learn these within forty days that the school was established.

Nyaru, joining the popular call, appealed to relevant authorities to recruit additional teachers to the growing population of pupils. He appreciated the donation of the instructional materials.

In his goodwill message, the village head, Ardo Kaku Galadima has thanked NCNE for the intervention, which he said would add value to the teaching and learning situation. He commended Jamila Hassan for establishing Ardo Kaku Nomadic School and the teacher, Mr. Danus Kemuel Nyaru for his dedication and selfless service. 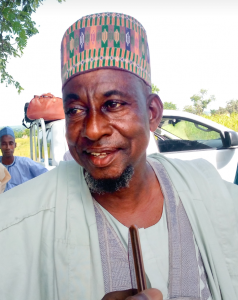 On the the need for parents to allow their female children go to school as opposed to early marriage, Galadima said “even the married ones will be allowed to go to school, not to talk of the unmartied. Early marriage will be a thing of the past”.