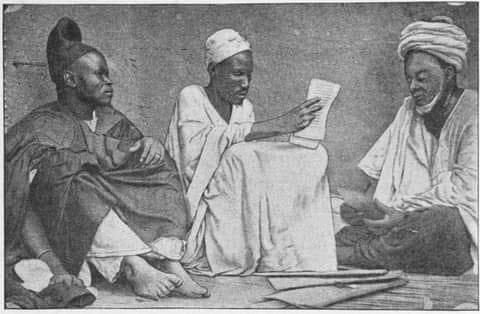 Among numerous issues that have been ignored lately, is the controversial omission of the “Ajami” script from the new Nigerian Naira notes.  There has been no sensible reason or explanation from the Central Bank, and the reaction to it has been mute.

I first heard of the calligraphic marvel when my mother told me she saw a young boy in Wuse Market Abuja, sitting by a stall, writing a letter.  She said his penmanship was so eloquent she had to ask him what he was writing about.  He told her he was writing to his father back in their hometown.  When I heard that the Naira notes will no longer feature this legacy, I decided to educate myself (and whoever may care).

Those who took part in the removal of Ajami and those who supported it, have no idea of its significance in African history.  Hausa is not the only African language to use Ajami.  Several other West African languages, including Fulfulde, Nupe, Mandinka, Kanuri, Wolof, and Tamasheq, have used Ajami writing as early as the 11th century.  Ajami has been used for commerce, literature, politics, botany, medicine, law, astronomy, history, scholastic purposes and so much more.  Essentially, documenting life!

Ajami is African language written in Arabic alphabets.  It has evolved with additional dots, strokes, letter substitutions and modifications.  The earliest Hausa Ajami documents known are from the 15th century.  In fact, the earliest Tamasheq Ajami manuscript is a pharmacopeia.  In
the 19th century, Shehu Usman Dan Fodio wrote several political and religious poems in Hausa and Fulfulde as a medium to preach Islam.  He wrote,

To abandon Ajami is to relinquish history.  Our African history!  There are books by intellectuals, treaties by rulers, scrolls from historians, and letters by our great grandparents written in Ajami. This is no small accomplishment.  It is an intellectual heritage of great importance. Today, ironically, those who read and write in Ajami are considered illiterate.  One is only “literate” when they
speak, read, and write a European language.  (colonial hangover)

This is not the first attack on Ajami in Africa.  In the past, French have confiscated and burnt several Ajami scripts.  People hid books and texts away from the colonialist to preserve their history.  In Nigeria, Frederick Lugard insisted that Ajami be replaced with Latin
letters.  I understand that colonialists did so because they feared the knowledge and rebellion.  It was a sort of cultural genocide to subdue and control.  Already they could not disrupt the well-established institutions in the North; they had to rule
indirectly through the Emirs.

Why the Central Bank of Nigeria would repeat such a callous move is still unknown.  Instead of committing cultural genocide, Ajami should be revived and recognized.  Learn it, teach it, and value it.  It should be recognized as an integral part of Nigerian history.

CNN's Lie of a Deadly Massacre