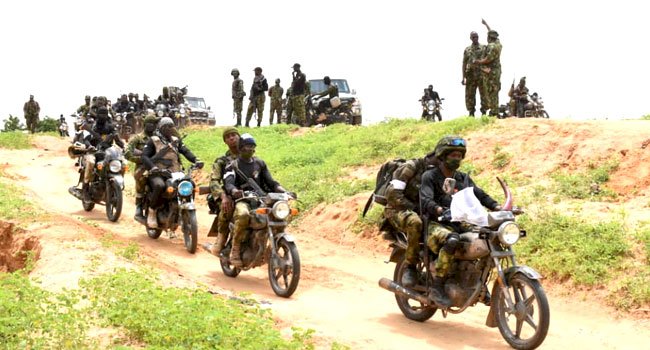 A photo released by the military on September 5, 2020, shows some soldiers riding on motorbikes during an operation in Nigeria’s north-west region.

An attempt to kidnap the travellers on Monday morning was thwarted by soldiers of the 4 Battalion of the Nigerian Army in Igabi Local Government Area (LGA) of Kaduna State.

During the operation, the troops also rescued 39 other people kidnapped by the bandits while travelling from Sokoto State to Onitsha in Anambra State, south-east Nigeria.

The Commissioner for Internal Security and Home Affairs in Kaduna, Samuel Aruwan, confirmed the incident in a statement.

He noted that the incident happened in the early hours of Monday, adding that the operation carried out by the troops was successful.

Aruwan stated that due to the superior firepower of the soldiers, some of the bandits escaped with bullet wounds while the troops were already trailing them to areas said to be their enclaves.

He said troops also repelled another bandit attack on the Kaduna-Abuja Road when they attempted to advance towards the Audu-Jungom axis in Chikun Local Government Area.

According to the commissioner, the bandits were pursued to Ungwan Tuta from where the troops lost contact with the criminals.

He insisted that the bandits were denied freedom of action by the troops as they could not carry out their nefarious act.

While the troops successfully dislodged the bandits along the Kaduna-Abuja road, Aruwan disclosed that a stray bullet fired by the criminals hit a driver and passenger.

He stated that the troops also responded to distress calls about bandits attacking residents in the same general area.

Following their arrival at the location, the soldiers recovered 69 cattle while one of the bandits was killed in the process.

On Sunday evening, troops rescued some passengers kidnapped by bandits on the Kaduna-Kachia Road in Kachia Local Government Area.

In his reaction, Kaduna State Governor, Nasir El-Rufai, commended the soldiers for the onslaught against the bandits.

He also condoled with the families who lost their loved ones and wished those injured a speedy recovery.