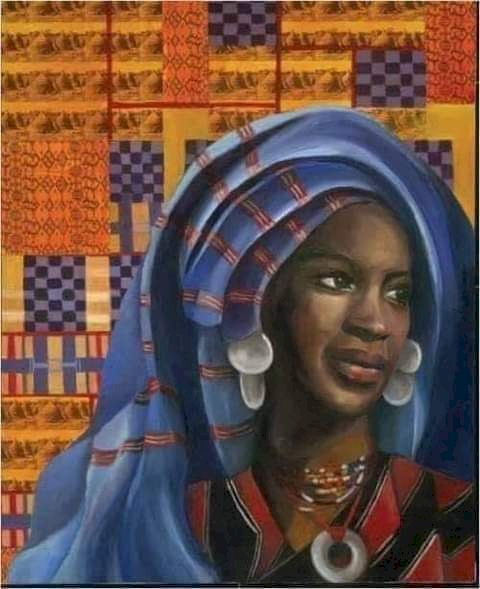 (1793-1864) was a Fulani princess and a scholar of the Sokoto Caliphate of Northern Nigeria.

Taught by her father, Uthman Dan Fodio, her stepmother, Aisha, her brothers Abu Bakr and Mohammed Bello (grandfather of Sir Ahmadu Bello), she gained a deep knowledge of Qur'anic teachings, as well as four languages; Arabic, Fulfude, Hausa, and Tamasheq.

With her father's backing, Asma'u set up the Yan Taru organisation.

The Yan Taru organisation was a collective of travelling teachers, trained by herself, then sent......out into the villages and towns to where the underdeveloped lived, shrouded by seclusion.

Her school, taught men, as well as women and those not of her faith.

Nana Asma’u was also a historian and an archivist of her father’s work; a governmental advisor, to her brother......Mohammed, a community mediator of wide renown, and a writer of works on diverse subject matter, such as law, medicine, and education.

Asma'u was also a poet, who used her poetry as teaching aids and a translator, who used her skills as a polyglot, to enhance learning.

Among her more than 60 surviving works written over 40 years, Nana Asma’u left behind a large body of poetry in Arabic, Fulfude, and Hausa, all written in the Arabic script.

Many of these are historical narratives, but they also include elegies, laments, and admonitions.

Her poems of guidance became tools for teaching the founding principles of the Caliphate.

Her works include and expand upon Dan Fodio's strong emphasis on women leaders and women's rights within the community ideals of the Sunnah and Islamic law.

Born in 1793 in Degel, 11 years before the Fulani Jihad (1804-1808), Asma'u outlived most of the founding generation of the Sokoto Caliphate, making her an important source of guidance to its later rulers.

Her writings, which gave a detailed description of the 19th-century life in the Caliphate, are still being studied around the world.