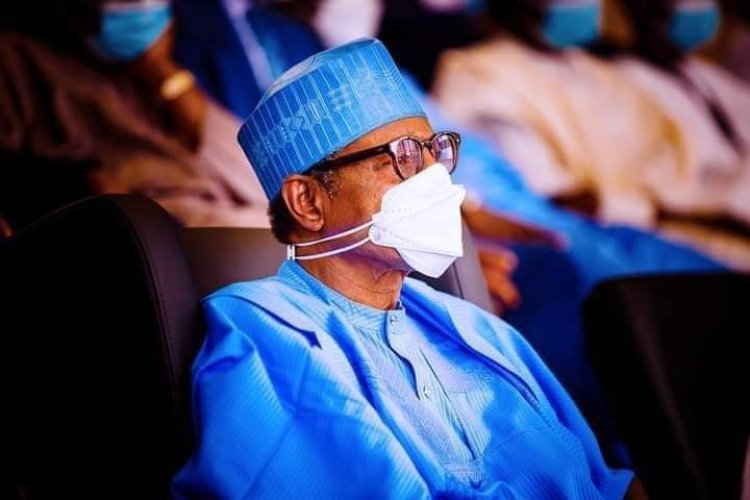 Underrate him at your peril, he holds the ace of strategic impulse, deeply unassuming but perilously a master strategist.

Still a grand guru of unpredictability and a political mystery. Till date, no one has been able to dissect and give an exact diagnosis of the man called Muhammadu Buhari

Experts in the study of body language and gesture are still in awe of the man, political clairvoyants are still in limbo on the impenetrable nature of the man, close aides have been rendered strangers to the inner workings of the mind of this Daura born political enigma. Like he once said, indeed, his mind belongs to everyone and to no one – the very reason he has remained a mystery.

In the last one month, the All Progressives Congress , APC was in the eyes of a tumultuous storm, the party was embroiled in a litany of political intrigues, manipulations and fierce internal struggles. Camps outwit camps as groups battle groups in wits and propaganda.

It got to a point where all hell was let loose as the actors went publicly ballistic in embarrassing fights of attrition. All these narrowed down to one forte; the 2023 general elections. Who becomes who and what were the crux of the fierce battles and the house was near its collapse. Until one man who undoubtedly is the rope that ties the broom waded in and in a telepathic switch everything returned to the default setting, and the ruling party roars back to life.

He first warned in measured words, that the party must not make the mistake of ever allowing the main opposition People’s Democratic Party, PDP  return to power. With this sinking into the consciousness of the party faithful defined in belligerence interests, the president reeled out his intervention in what pundits now describe as mechanical and choreographed traces of purposeful leadership.

Indeed politics is consultation laced with deep reflections given the recent happenings in the APC. The conclusion is that the President is not only fully aware of everything and everyone and all the schemings under him but has a tap on every move to the minutest details. He was just observing like a veteran war General awaiting the clinical time to strike.

Mr President is not only in charge but fully in charge.The four meetings held within the last 48 hours is proof that he understands Wetin dey play. First with the governors, followed by the party aspirants, the National Assembly caucus of the party and then the founding fathers of the party. These deft moves show the man genuinely means well for APC and Nigeria as I have always known and hold in respects all critical stakeholder and the value they bring onto the table. You do not ever take a General for granted or undermine their war strategy.

A day to National Convention and PMB has met with virtually all critical stakeholders of the Party. Leaving everything to this injury time is to me a strategy anchored on appropriate timing and period when there will be no time to RETREAT to REGROUP.

Make no mistake every of those stakeholders are fully under the radar. ‘If you no fear Military, try fear General’ especially the old fox with unpredictable acumen. President Olusegun Obasanjo did same in 2007 for PDP and BOOM President Umaru Yar’Adua appeared.

If you remember President Buhari’s famous bombshell of January 2022 during his chat with Channels TV where he said “If I reveal my preferred successor they will eliminate him” then you can understand that the man is undoubtedly a strategist of inimitable pair.
Written by ABDULLAHI O. HARUNA (Haruspice)

*Abdullahi O. Haruna (Haruspice) a core Buharist and author of ‘The Buhari in Us’ writes from the School of Musing thoughts and reflection.*