Joshua Nimyel Dogonyaro: A Special Tribute to a Soldier's Soldier 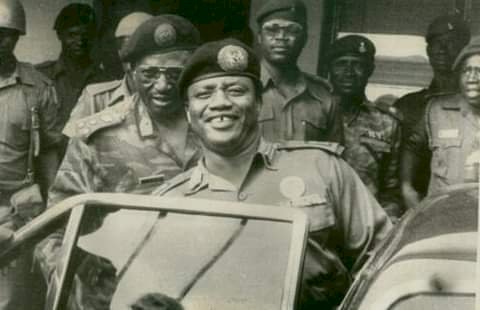 As they say old soldiers never die - they only fade away. That is why the recent demise of General Dogonyaro is akin to the proverbial falling of an elephant. But as G.O. Enoch Adeboye despite his personal grief motivationally enunciated in the same context albeit in a different background, "We lost a General but we didn't loose God. One man down, we regroup and advance."

The attached photograph is dated Tuesday, August 27, 1985. It was taken soon after what  military intelligence guru and onetime Army chief, Major General Mohammed Chris Alli describes in page 77 of; Federal Republic of Nigeria Army (2002) as a "champagne breakfast" at Bonny Camp in Victoria Island. It was actually an inner caucus meeting "to flesh out the details of the new leadership" and toast to the clinical efficiency in overthrowing the Buhari led junta. IBB also wanted to personally thank the coup artisans on ground as he had only flew in from Minna that morning where he had gone to celebrate Eid. Later in the day, Major General Sani Abacha would address the nation subsequently the new sheriff in town.
Then Brigadier Dogonyaro who had earlier by 6am addressed the nation through a radio broadcast is seen ushering IBB away from the venue. Directly behind them is Lt. Colonel John Nanzip Shagaya (1942-2018), then CO 9th Mechanized Infantry Brigade, Ikeja with the "Lion of Ziturung" Lt. Colonel Yohanna Anteyan Madaki (1941-2006) far right, both pivotal members of the so-called "Northern, but not Hausa" core support group that stabilized IBB in power for nearly a decade.

The scholarly Shagaya was actually a serving Corporal when he enrolled into Short Service Course 1 at NDA in 1967. He was to rise to the rank Brigadier and in the 4th Republic be a serving senator until his demise in a car crash in 2018.
Madaki was also commissioned as an officer from the ranks at the front. After the Nigerian Civil War when asked to proceed to Mons Officer Training School at Aldershot in the United Kingdom he wrote a petition to the then Army chief that what other training was better than the battlefield he had just returned from? He was still at the Nigerian Law School in Lagos when this historic picture was taken. As Military Governor of the former Gongola State (now Adamawa and Taraba) Madaki would dethrone the Emir of Muri stating, "I have dealt a mortal blow on feudalism." An Arewa counterblow would however shortly throw out Madaki from the army at the rank of Colonel.

How Dogonyaro, a quiet soft spoken clinical student at the Federal School of Dental Technology along Broad Street on Lagos Island became a hard, "imposing old school soldier with the bluff swagger of a Wild West gunslinger" is stuff of legends. Unfortunately, Dogonyaro never in his lifetime presented his memoirs to the public. Selected into Course 1 of NDA in 1964 he became mates with two future Army chiefs, Salihu Ibrahim and Aliyu Mohammed Gusau, a Navy chief Alison Madueke and a Defence chief like his good self, Oladapo Diya. The Plateau born man mountain would also be a Staff College participant at Jaji alongside Sani Abacha (1943-1998) in 1976. His other coursemates in Nigeria's premier military institution are Lt. General Jeremiah Timbut Useni and Major General Ishola Williams.

When told a storm is coming; he replied - I am the storm!

On September 9, 1990 in faraway Monrovia, the Liberian capital the embattled President Samuel Kanyon Doe (1951-1990) was invited to the ECOMOG headquarters for a crucial meeting with the Ghana's Lt. General Arnold Quainoo and Nigeria's Brigadier Cyril Iweze after assurances of safety as gun toting rebels had already besieged the city. Unfortunately, it turned out to be a well laid out ambush as Lt. Yormie Johnson erstwhile ADC to General Thomas Quiwonkpa, Doe's dismissed number two in exile had obviously compromised the venue. Doe was captured and dragged away by Johnson then a rebel faction leader allied with Charles Taylor right in front of ECOMOG troops from Nigeria, Ghana and Gambia. The videotaped gruesome torture and grisly murder of Doe thoroughly embarrassed our nation, the lead partner and main sponsor of the peacekeeping force.

IBB acted decisively by dispatching Dogonyaro to Monrovia who upon arrival told Quainoo to his face his services were no longer required. Iweze was rotated back home and eventually retired.
The historian Max Siollun recalls, "While in Liberia, Dogonyaro's no-nonsense, swashbuckling, all-action style led him to be nicknamed General " I don't give a damn". He ordered punishing air strikes on rebel positions, drove the rebels out of Monrovia, and established safe corridors for the transport of aid to civilian refugees.
Despite Dogonyaro's spectacular success, Babangida inexplicably recalled him to Nigeria after only six months. The taciturn Dogonyaro declined public comment on his swift recall. Throughout his years as a member of the military government, he rarely gave interviews and offered deadpan black-and-white textbook answers when asked about mi!itary matters."

Ahead of the February 16, 2019 presidential elections 71 retired generals dropped by the Villa to endorse President Buhari pledging their "full support and continued loyalty". Dogonyaro was conspicuously absent which is hardly surprising. As a professional soldier to the core he shunned politics and gave politicians a wide berth. Throughout his illustrious career all his postings and appointments were strictly military until attaining the enviable rank of Lieutenant General. For restoring Nigeria's pride and glory he was deservedly conferred with Commander of the Federal Republic (CFR) after his heroic return from Monrovia.
On September 12, 2020 when he turned 80, he declared, "Today's Nigeria is frightening, disappointing." See details in September 12, 2020 edition of Nigerian Tribune.

I recall the esteem of once meeting the retired but not tired armored general's towering presence as part of a delegation. A gregarious fellow, he openly discussed various national issues admitting military governance was an aberration. He baulked when taken up on the OIC imbroglio. The attempted Dimka coup of 1976 was another no-go area.