"I’ll Kneel Before My Husband; He Is The Head Of My Family, It's For Love & Affection" – Samia Tanzanian President 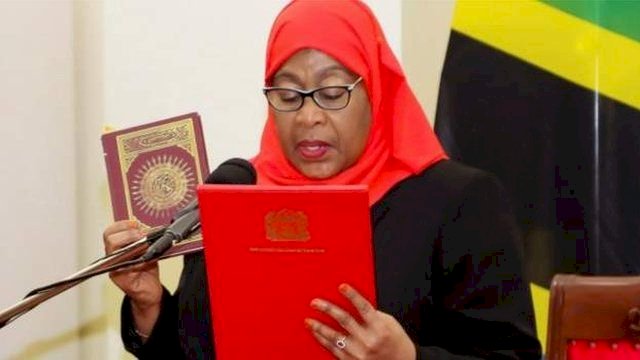 President of Tanzania is currently receiving a lot of accolades on social media after a video of her saying that her accomplishment will not make her stop being submissive to her husband has resurfaced online.

Samia Suluhu said this while she was Vice President to the late John Pombe Magufuli, adding that kneeling before her husband to show submission and honour would not make her inferior to him but was rather a sign of love and affection.

According to reports, she said at a past gender function that despite the powerful position she occupies, Hafidh Ameir remains her husband and head of the family.

"Some of you will say we are equal in all aspects of society, No! That's not the right position. Even as vice president, I will kneel before my husband. I don't kneel because I am inferior, it's because of love and affection,” the 61-year-old President said in the old undated video.

She went further to advise her fellow women to stop competing with their husbands over superiority to create a peaceful home congenial for the proper upbringing of their children.

“Don't leave this tradition so we can strengthen the bond of our families and bring up our children through good manners."

Samia became President of the Eastern African country following the death of her boss John Pombe Magufuli on Wednesday, March 17.

She had served as vice president since 2015 when Magufuli, nicknamed the bulldozer, was first elected into office. Reports say she led a private life despite her high-profile status, and little is known about her husband, Ameir.

The soft-spoken politician was born in January 1960 in Zanzibar and got married to Hafidh Ameir, an agricultural academic in 1978.

The couple has four children but Ameir has lived a low-profile life all these years and was rarely been seen in public with his wife.

He has now become the first gentleman of Tanzania due to his wife’s rise from the position of Vice President to President.

One of their daughters, Mwanu Hafidh Ameir, took after her mother and ventured into politics and currently serves as a member of the Zanzibar House of Representatives.