Supporters of President Muhammadu Buhari are currently at the Nigerian Diplomatic Mission in London. Popularly known as Abuja House, the protesters stormed the residence... 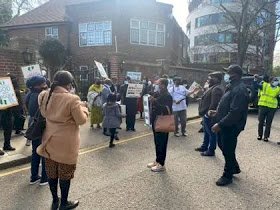 Supporters of President Muhammadu Buhari are currently at the Nigerian Diplomatic Mission in London.

Popularly known as Abuja House, the protesters stormed the residence with placards which have inscriptions such as “This Storm Will Surely Pass”, “God Loves Nigeria”, “We Are Stronger Together”, among others.

Anti-Buhari supporters led by Reno Omokri, a former aide of ex-President Goodluck Jonathan, have been protesting in front of the house for some days.

They had asked the president, whom they accused of wasting taxpayers money, to return to Nigeria immediately.

Omokri had said the protesters laid a siege to the house and Buhari had been denied access to his doctors.

But speaking during the protest, one of the supporters of the president described Omokri’s claim as fake news.

“There is the news about the president being held hostage, everyone could see, to my left, my right, you can see that there is nothing there, no one is being held hostage, it’s all fake news. But we are here today to actually show support to the President of the Federal Republic of Nigeria, President Muhammadu Buhari, that we are here for you, Nigeria in the diaspora actually support you.

Buhari is currently on a medical vacation in the UK.

He left the country on the eve of a nationwide strike by the National Association of Resident Doctors and this sparked an outrage.

In Mali, the ruling junta commits to an eighteen-month...

Terrorism in Mali: Rocket attacks against French and UN...