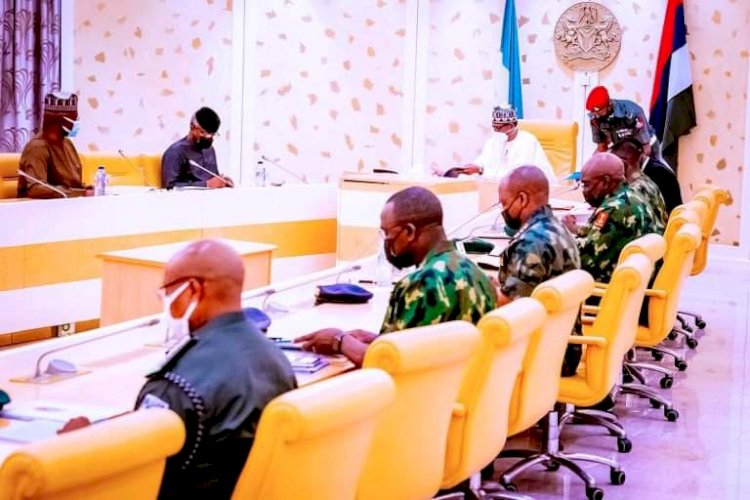 The meeting came over 24 hours after armed robbers attempted to attack the residence of the Chief of Staff to the President, Ibrahim Gambari, on Monday.

The Presidency announced the meeting via its Twitter handle but did not give details of its agenda.

However, the meeting is expected to review the current security situation in the country.

Before the meeting, there had been previous security meetings on Friday, April 30, and Monday, May 4.

The meeting, which started at 10 am, held at the Conference Hall of the Office of the First Lady.

Among others at the meeting are the Vice President Yemi Osinbajo; the Secretary to the Government of the Federation, Mr Boss Mustapha; the Chief of Staff to the President, Professor Ibrahim Gambari; and the National Security Adviser, Major-General Babagana Monguno.

The PUNCH had reported there was an attempt by armed robbers to burgle the residence of the Chief of Staff to the President, Ibrahim Gambari, early Monday morning.

The Senior Special Assistant to the President on Media and Publicity, Garba Shehu, on Monday confirmed “a foolish attempt” to burgle the residence of the Chief of Staff to the President, Prof. Ibrahim Gambari, inside the Presidential Villa, Abuja.

He claimed that the incident that happened around 3 am was not successful.

The presidential aide wrote, “The Chief of Staff, Prof. Ibrahim Gambari, has confirmed that there ‘was a foolish attempt’ to burgle his residence at 3am this morning, but it turned out to be unsuccessful.

“Prof Gambari, whose house is on a street next to the Villa, has assured that there is nothing to worry about from the incident.”

An online newspaper, Peoples Gazette, had earlier in the day reported that armed men suspected to be robbers invaded the residences of two senior aides to the President, Major General Muhammadu Buhari (retd.), inside the precinct of the Presidential Villa.

The medium reported that the incident forced Gambari and the administrative officer, Abubakar Maikano, to abandon their residences.

“Their houses were robbed and the robbers packed money and other valuable assets from both houses,” the medium had quoted a source as saying.

End of Ramadan: The Festival of Eid El Fitr prayers celebrated this Wednesday in...