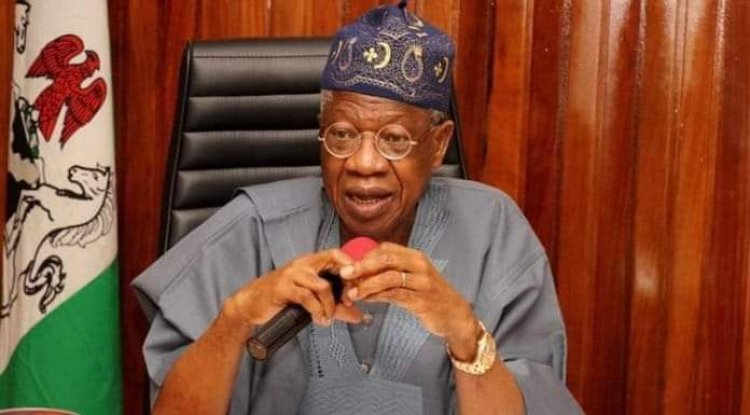 The Federal Government says, the economic blueprint recently unveiled by Atiku Abubakar is a “crude attempt at copying all that the administration of President Muhammadu Buhari has done’’.

Mr Abubakar is the candidate of the opposition Peoples Democratic Party for the 2023 presidential election.

Minister of Information and Culture, Lai Mohammed, told newsmen in Abuja on Thursday that Abubakar’s blueprint is a poor version of the present government’s economic strides.

He said the blueprint unveiled by Mr Abubakar in Lagos the previous week did not offer anything new in job creation, infrastructure financing and relationship with the private sector.

According to the minister, other areas poorly copied by Mr Abubakar in the blueprint were the rejuvenation of the power sector, poverty reduction, debt management and the overall management of the economy.

“It is shocking that an opposition that has condemned all that this administration has done will turn around to weave its so-called economic blueprint around the same things that are currently being done.

“This news conference is aimed at exposing the hypocrisy in an opposition that condemns an administration while showcasing a blueprint that is nothing, but a poor version of what’s on ground,” he said.

Buttressing his point, Mr Mohammed said the position of Mr Abubakar in the blueprint that “reducing infrastructure deficit will enhance economy, unleash growth and wealth creation’’, is not novel.

“No one understands this better than this sitting administration.

“Even our worst critics will agree that our record on infrastructure development is next to none in the history of this country.

“We have also delivered houses in 34 states of the federation under the first phase of the National Housing Project.

“We were able to achieve these through a combination of budget increase and innovative infrastructure financing methods,’’ the minister stressed.

Mr Mohammed recalled that before the President Muhammadu Buhari’s administration came to power, budget for roads component of the Federal Ministry of Works was a meagre N18.132 billion.

He added that when Buhari got into office in 2015, the budget for the Federal Ministry of Works and Housing increased exponentially to N260.082 billion in 2016.

“Therefore, for anyone using this as a campaign stunt without acknowledging what we have done so far is cheap and disingenuous.

“Let me say that I am not really very surprised that His Excellency the former vice-president only reeled out, in his so-called economic blueprint, what we have been doing in the past seven years plus.

“That’s what you get from someone who leaves the country after losing an election, only to parachute into town when another election is due,’’ Mohammed stressed.

The minister commended the Buhari government for engaging in massive infrastructure development in spite of the paucity of resources.

SSS Urges ASUU To Call Off Strike Over Security Implications