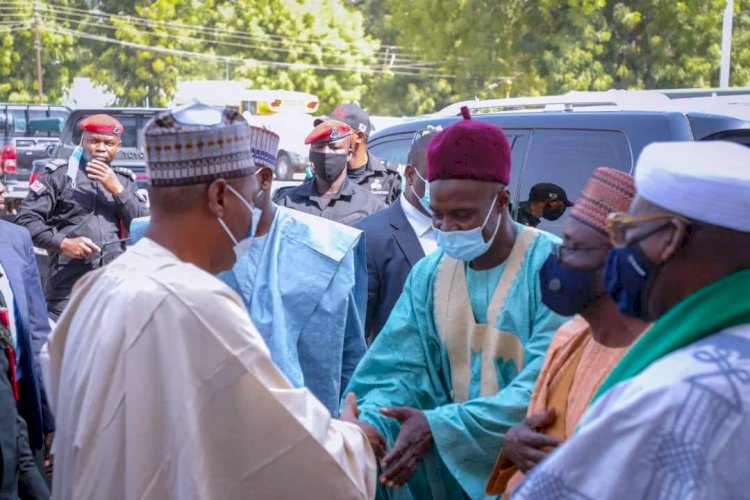 Borno State Governor, Prof. Babagana Umara Zulum on Monday declared open, a three-day public hearing for collation of stakeholders' input towards the complete reformation of Almajiri traditional Islamic education system in Borno State, where the system is known as Tsangaya.

The public hearing, which had in attendance Islamic clerics who either founded, managed, or taught in traditional Almajiri system, was organized by a high powered committee established on November 19, 2020, by the Governor, with the mandate of reforming the Almajiri system. The committee is being chaired by Khalifa Aliyu Ahmed Abdulfathi.

The event held at the multipurpose hall of the Government house in Maiduguri.

Declaring the public hearing open, Governor Zulum announced plans by his administration to construct 27 higher Islamic colleges, which will provide opportunities for eligible adults with adequate islamic knowledge to acquire Diplomas in Western education, after meeting laid down academic pre-qualifications. By that, each of Borno’s 27 local Government areas will have one of the schools.

Zulum explained that the higher Islamic colleges will be designed to also serve as Islamic research centers, in addition to teaching and learning.

Professor Ibrahim Muhammad, a Director, Qur’anic education center, Bayero University, Kano, who was guest speaker at the occasion, eulogized Borno’s Governor, Prof. Zulum for his rare focus and a style of leadership that involves adequate planning.

“Borno is very lucky to have Zulum as its leader” Prof. Muhammad declared before going into the details of his paper.

The Prof’s paper gave historic account on how Almajiri system of education started in northern Nigeria, tasking stakeholders in Borno State to remain focused on their planned reforms.

In their separate contributions, guest of honour, Dr. Usman Bugaje, an Islamic scholar, political activist and civil society leader, and former Vice Chancellor of the University of Maiduguri, Prof. Abubakar Mustapha, spoke on ways towards the reformation of the system.

The three speakers are expected to present papers during technical sessions while other stakeholders will make contributions.

The event was attended by representatives of the Shehu of Borno, Abubakar Umar Garbai Elkanemi and Executive Secretary, Universal Basic Education Commission (UBEC), the Chief Imam of Borno and top Government officials led by the Head of Service.

It was A Plan Agenda To Destroy The Good Relationship We've...