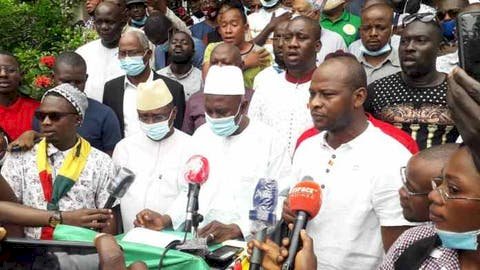 As Guineenews had sensed from reading the National Front for the Defense of the Constitution (FNDC) press release on Wednesday, in addition to the ongoing electoral crisis, Alpha Condé will have to face another front.

Indeed, the National Front for the Defense of the Constitution (FNDC), which had been in retreat for a few weeks, because of the electoral process in which some of its members were engaged, will resume service.  Unless there is a last minute change, it is a matter of time.  The anti-third term movement led by Abdouramane Sano is about to relaunch the protest against the Conde power soon.

“We are in the process of drafting a press release.  We will be calling for general protests from Friday until Alpha leaves, "our source exclusively told Guineenews.

A decision that comes as the protests by supporters of Cellou Dalein Diallo, the candidate proclaimed the winner by his own party, begin to gain momentum.

The days of Tuesday October 20 and yesterday Wednesday October 21 were particularly turbulent in Conakry and in some towns in the interior of the country.  With many deaths, injuries and material damage.

As a reminder, in response to the criticisms leveled against him after his decision to participate in the presidential election, the main political opponent of Alpha Condé replied that his candidacy is rather complementary to the dynamic set in motion by the FNDC.