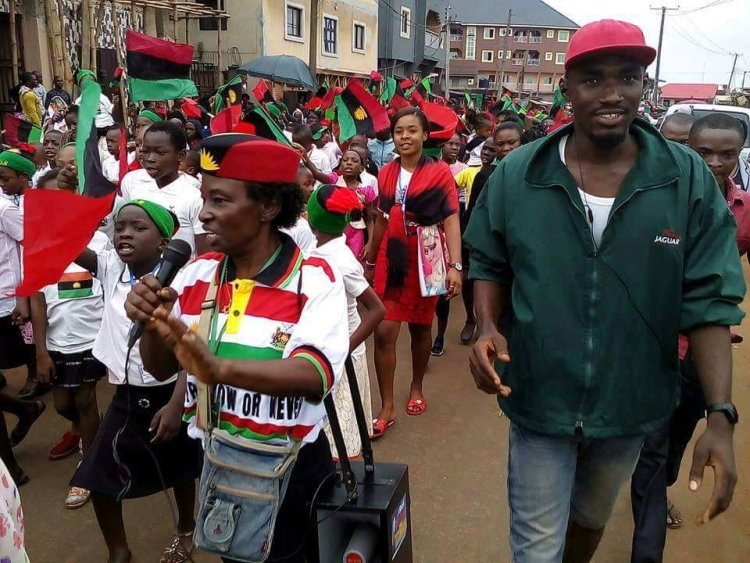 •.Nothing should stop poll, Ohanaeze warns

The Indigenous People of Biafra has declared a one week sit-at-home protest across the South-East states starting from November 5, the eve of the governorship election in Anambra State.

IPOB’s Media and Public Secretary, Emma Powerful, in a statement on Saturday in Awka, the Anambra State capital, said the protest was aimed at prevailing on the Federal Government to release its leader, Nnamdi Kanu.

The group vowed that the protest would go on as planned if Kanu was not released before November 4.

Kanu is facing trial on a seven-count amended charge bordering on treason and terrorism.

The Federal Government had blamed the IPOB leader for the murder of Dr. Chike Akunyili, the husband of a former Director-General of the National Agency for Food and Drug Administration and Control, late Prof. Dora Akunyili.

A Presidential committee set up by the President, Major General Muhammadu Buhari (retd.), had also accused Kanu of being responsible for the murder of a former presidential aide, Ahmad Gulak, and over 184 others in the South-East.

The committee, headed by the Attorney-General of the Federation and Minister of Justice, Abubakar Malami (SAN), said consequent upon the instigating directives of Kanu, IPOB members and the Eastern Security Network carried out massive attacks on democratic institutions, especially facilities of the Independent National Electoral Commission to hamper democratic process in Nigeria.

Kano was arraigned on October 21 with journalists prevented from entering the court to cover the proceedings and the case was adjourned till November 10 for further hearing.

But IPOB in a statement on Saturday asked the Federal Government to release Kanu from custody before November 4, threatening to impose a one-week sit-at-home order across the South East, which could disrupt the November 6 governorship election in Anambra.

The statement read in part, “Following the adjournment of our great leader Mazi Nnamdi Kanu’s court case to November 10, 2021, by the Federal High Court Abuja, we, the great movement and family of the Indigenous People of Biafra,  wish to inform Biafrans, friends of Biafra and lovers of freedom that IPOB will lock down Biafraland from November 5 to November 10 except Sunday, November 7th, a day our people worship the almighty God, if  the Nigerian Government fails to release our leader unconditionally before 4th of November 4, 2021.”

The secessionist group said though it was aware of the adverse effects of the sit-at-home order on the people, it took such a drastic measure to achieve a better purpose in the collective interest of Biafrans.

The statement added, “We have taken time to analyse what transpired on October 21 when our leader was arraigned and discovered that the Federal Government is not sincere and only wants to humiliate him and keep him perpetually in DSS custody to rot there.

“We all saw how lawyers, journalists, Igbo delegates, respected traditional rulers and other people who came from all around the world to witness his court case were restricted and denied access into the court premises by security agents who kept them outside under the scorching sun.”

However, reacting to the proposed one week sit-at-home the apex pan-Igbo socio-cultural organisation, Ohanaeze Ndigbo Worldwide, warned that nothing should threaten the November 6 governorship election.

The spokesperson for the group, Chief Alex Ogbonnia, warned all parties to tread with caution, saying it would be unwise to stop the polls.

Ogbonnia, who said this in an interview with one of our correspondents on Saturday, called for calm while efforts to ensure Kanu’s release were being made by Igbo leaders.

He said, “Ohanaeze Ndigbo urges everybody to show maturity and wisdom especially in issues concerning the Indigenous People of Biafra, especially now that leaders in Igboland from all walks of life have united in the struggle to ensure that Mazi Nnamdi Kanu is freed.

“The November 6 Anambra governorship election is very important to all Ndigbos, because the state is the economic live wire of the Igbo. It is in the best interest that Anambra maintains its economic growth. Therefore, we appeal to our youths to show maturity. Anything that disrupts this election is not in the interest of the Igbo. We wish that the election should be held.”

Meanwhile, counsel for Kanu and IPOB, Ifeanyi Ejiofor, said that it will not be bothered by what it described as “trending falsehood” and “media propaganda” from the Federal Government linking Kanu with recent high profile killings in the South-East.

Ejiofor, in a text message to one of our correspondents on Saturday, urged IPOB supporters to remain calm, peaceful and be focused.

He vowed that no hearing would be conducted on Kanu’s case without media presence, on November 10.

He said, “There is no cause for alarm Umuchukwu Okike Abiama (children of God Almighty); do not panic at all. I may not wish to dignify their trending falsehood by directly responding to it but it is a bad strategy, already dead on arrival. We saw it coming.

“After a robust outing of October 21 and strong objection raised to the empty charge, the narratives changed. Note that the media has been awash with this false narrative from the first day our client was extraordinarily renditioned to Nigeria, even before the amended seven-count was filed twice.”

Kano Edu Comm directs for the re opening of 6 Technical...