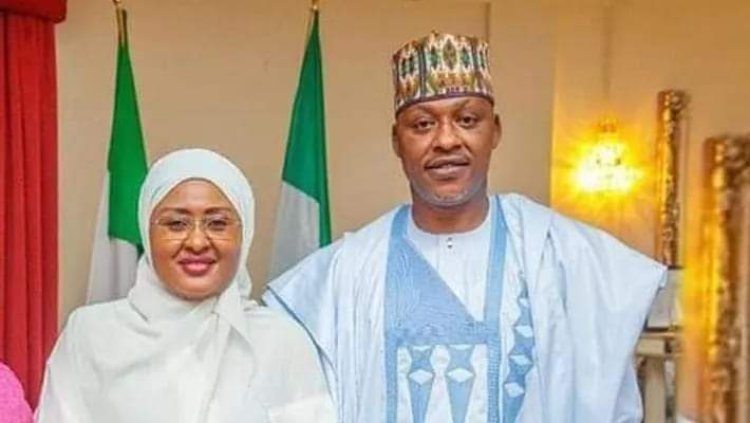 The Central Bank of Nigeria, CBN, may have since announced that the naira notes of 200, 500 and 1,000 would be redesigned for some reasons, but it is the Nigerian Security Printing and Minting Company (NSPMC), a government-owned banknote printer and mint that will see the action through.

Founded in 1963, the federal government-owned minting firm is presently under the leadership of Ahmed Halilu, a participant of Senior Executive Course 39, 2017, of the National Institute for Policy and Strategic Studies Kuru, Jos.

The Economic Confidential reports that Halilu who was appointed the Managing Director of NSPMC last month is an elder brother to Aisha Buhari, the wife of the President.

Before his latest appointment, Halilu had headed the company in acting capacity, following the resignation of Abbas Masanawa on May 16.

Buhari approved the appointment of Halilu after the recommendation of the governor of Central Bank, Godwin Emefiele, who serves as the NSPMC board chairman.

Mr Halilu has over 23 years of experience in the Banking industry having worked with African International Bank Limited, AIB and Zenith Bank Plc.

Mr Halilu holds a Bachelor’s degree in Agriculture B. (Agric), Masters in Business Administration as well as Masters in International Affairs and Diplomacy all from Ahmadu Bello University Zaria.

Halilu had earned several other professional and diploma certifications that proved his wealth of knowledge. His managerial experience is not in question considering his 15 years of managerial and financial portfolio.

Economic Confidential gathered that his first working experience post-nysc in 1992 was at African International Bank at Kano State. He would thereafter become a deputy manager in charge of Foreign Exchange department in 1998.

Furthermore, his earliest managerial position was his two-year stint at CBN Kaduna Branch as the manager in charge of Corporate Banking Loans and Advances Recovery. In his long career as a financial expert, he had attended not less than 17 high-value courses.

The Adamawa State-born technocrat is also a member of the Nigerian Institute of Management, NIM.

Emefiele, while announcing the Apex Bank’s intention to redesign the country’s currency, said CBN would release the re-designed naira notes by December 15, 2022.

According to the CBN governor, this was targeted at controlling currency in circulation as well as curb counterfeit currency and ransom payment to kidnappers and terrorists.

He noted, “Indeed, the integrity of a local legal tender, the efficiency of its supply and its efficacy in the conduct of monetary policy are some of the hallmarks of a great central bank.”

On how it would help curb ransom payment, he said, “Also, in view of the prevailing level of security situation in the country, the CBN is convinced that the incident of terrorism and kidnapping will be minimised as access to large volume of money outside the banking used as source of funds for ransom payment will begin to dry up.”

He further identified more reasons that necessitated the re-designing of naira notes.

According to the apex bank governor, the challenges included: significant hoarding of banknotes by members of the public; worsening shortage of clean and fit banknotes with attendant negative perception of the CBN and increased risk to financial stability; and increasing ease and risk of counterfeiting evidenced by several security reports.

Following Emefiele’s pronouncement, experts and Nigerians would have concluded that critical stakeholders endorsed the move to give our naira notes a facelift. But they got a shocker when the federal government, through the Minister of Finance, Budget and National Planning, Zainab Ahmad, denied having knowledge of the naira redesign.

Ahmad, while disowning the policy, said if implemented, the redesigning would portend great consequences for the nation and its economy.

With both Emefiele and Mrs. Ahmed serving in the same government, and the former even reporting to the latter, it is incredulous that FG is denying having knowledge of the Emefiele-led CBN’s latest action.

The two questions begging for answer are: how will CBN come up with an economic policy without first intimating FG? Is Emefiele and the Finance Minister not working for the same government?

Commenting on the development, former Economic Adviser and Chief Executive Officer of National Planning under President Olusegun Obasanjo, Prof. Magnus Kpakol, said that the exercise would come at a cost, adding, however, that the apex bank must have considered the cost of the change to the economy.

On his part, the Executive Director, Technical, Anchor Insurance Limited, Mr. Adebisi Ikuomola, said that the he doesn’t see the development having any tangible effect on the economy or strengthening the naira.

He said: “The CBN said that the move is geared towards reducing the volume of naira in circulation, however I don’t see how that can positively affect the economy or strengthen the naira. The naira is weak in the foreign exchange market and this policy may not turn that around.”

In his reaction, the Chief Executive Officer, Centre for the Promotion of Private Enterprise (CPPE), Dr. Muda Yusuf, described the planned move by the apex bank as embarking on a profligate exercise and a distraction.

His words: “It is difficult to see any compelling value proposition of this currency redesign idea. The cost of such an action would be outrageous and disproportionate compared to the expected benefits advanced by CBN.”

Economic Confidential notes that amid the raging debate on the re-designed naira notes, President Buhari’s inlaw, Ahmed Halilu, and his team at NSPMC have their work cut out for them, if they want to meet the timeline of the release of the new naira notes set by Emefiele. The clock is already ticking.