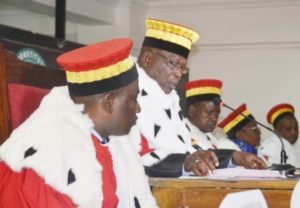 Cellou Dalein Diallo's party lodged an appeal with the Constitutional Court to contest the results published on Saturday October 24 by the CENI giving Alpha Condé the winner of the October 18 presidential election.

The Union of Democratic Forces of Guinea (UFDG), in its request, told the Constitutional Court that outside the localities where violence, arbitrary arrests, intimidation and threats have prevented opposition activists from surrendering  at the polls, the Guineans mobilized strongly to go and vote.

He noted that the actual voting operations went generally well.  According to the UFDG, it was after the closing of the polling stations that the `` machine of fraud was set in motion by the electoral administration in complicity with civil and military officials in order to disguise the votes of voters.  by modifying the results from the polling stations in favor of the RP candidate, Alpha Condé, to the detriment of Cellou Dalein Diallo ''.

In its 37-page request, the party evokes ballot stuffing in favor of the RPG candidate in certain prefectures of the country, especially in Upper Guinea and Forest Guinea, as evidenced by the photos, the videos circulating on the  net as well as the official report of the bailiff without any reaction from the CENI ''.

He makes the case of the ’relocation of the counting of the ballot boxes out of several polling stations.  When voting trends were deemed favorable to the UFDG candidate, the count was not carried out on site as provided for in the Electoral Code, but in places where the candidate's representatives were prevented, by various means, from d  '' access (prefecture, military garrisons, municipalities etc.).  This has been the case in several localities in the country (Nzérékoré, Dubréka, Yomou, Manéah, etc. "

Based on a computerized centralization system that it has set up to collect and count the results from the ballot boxes following the counting operations carried out by polling stations, the UFDG ensures that the `` totalization of results on the basis of  84.49% of the minutes collected gives a victory in the 1st round of the candidate of Cellou Dalein at 53.84% ''.

'' It is important to note that by considering that the 15.51% of the vote from the BV not collected in Upper Guinea, Lower Guinea and in the Forest region with the average participation rate of 65.66% are included, the candidate  of the UFDG is always the winner from the first round with 52.88% while that of the RPG has a score of 46.72% '', indicates the party to the constitutional judges.

He asks the Constitutional Court to annul ’the minutes of centralization of the results of the electoral constituencies of Kankan, Siguiri, Mandiana, Kérouané, Kouroussa and Faranah;  to order the reinstatement of the reports of the results of the polling stations illegally canceled or discarded at the level of the CACV of the electoral districts of Nzérékoré, Matoto, Matam, Kaloum, Dixinn, Fria, Kindia, Koundara, Dubréka and Boké and declare Mr. Mamadou Cellou Dalein  Diallo elected President of the Republic with a minimum of 53.84% of the valid votes cast. ''