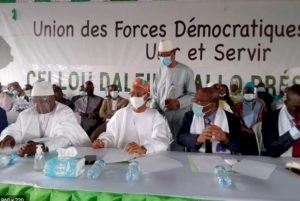 Dr Faya Millimouno, Bah Oury, Lansana Kouyaté et Cie, despite their status as opponents, say they are in favor of a political transition.  All members of the National Front for the Defense of the Constitution (FNDC), they show no support for the candidate of the Union of Democratic Forces of Guinea (UFDG) who proclaimed himself the winner of the October 18 election.

Despite everything, Cellou Dalein Diallo's camp is sticking to its position and claiming victory.  “A lot of people talk about transition.  I think it's an open-air flight.  Someone wins the election and we want to sit down and do nothing, "says Dr Edouard Zoutomou Kpoghomou in Eye of Lynx.

He announces that forming a government is an option on Dalein’s table.  ‘’ This is a possibility that should not be ruled out.  If he does, it wouldn't be bad.  The problem is, you have to have the approval of some.  But it will be an inclusive government.  Besides, I'm sure he's thinking about it.  We are not ruling out this possibility at all, "said the failed 2020 presidential candidate.

Responding to government authorities who accuse the leader of the UFDG of being at the origin of the post-election violence, Dr. Kpoghomou recalls that Alpha Condé's main challenger has always favored peace in Guinea.

“In 2010, everyone knows Dalein won.  I know the shenanigans they must have made [to declare Alpha Condé the winner].  But he [Dalein] agreed.  This time around, we have irrefutable proof, we cannot take refuge in saying that we will accept [the results published by the CENI].  It cannot be done, people must not be deluded.  We are determined, ’’ he said.

This ally of Dalein is seeking international arbitration for the settlement of the electoral dispute.  Il ’You should not do philosophy or dissertation.  It is about comparing the results on the basis of the minutes.  These are the numbers that will speak, ’’ he concludes.