The role of the Fulani (Falata) in the Mahdist revolution and the construction of modern Sudan: 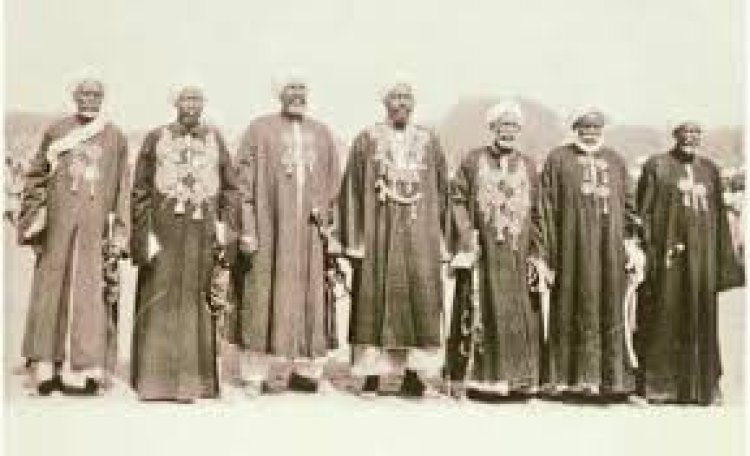 Al-Falata played an important role in the history of Mahdia, and its most prominent leaders were from the Fallata. It is said that the Mahdiyya itself is a Fulani idea.

Noam Choucair has cited:
(Geography and History of Sudan, p. 940) that Imam Muhammad Ahmad al-Mahdi, in order to unite the Sunnis, married one of the four largest tribes, among which was the tribe of Falata ,  he married Fulani woman Aisha bint Idris, the mother of the believers.
(Then Maryam, nicknamed Al-Maqoubeh, the mother of Mr. Abdul Rahman Al-Mahdi),
The Fulani tribe was responsible for the military leadership of the Mahdist armies, in order to assign the Jabakhana secretariat:
Al-Amin al-Futawy is the person who was taught and brought up by Muhammad ibn Omar al-Tunsi, as he mentioned in his book:
(Sharpening minds with the biography of the country of Arabs and Sudan).
Adam Al-Aasar and Hamid Al-Fayd took over the trust of the Bait Al-Mal in Mahdia, as recorded in front of their names in the Caliph Museum, and they are Fulani.
Imam Muhammad Ahmad al-Mahdi concentrated the authority of the judiciary in the hands of scholars from the men of the tribe of fulani , as recorded in the Caliph Museum. We mention among them:
1. Judge Ahmed Omar Aboha in the North.
2. Judge Ahmed Al-Senussi, Madani Al-Falani, in Darfur.
3. Judge Yassin Abu Umm Dalal.
4. Judge Ahmed Omar Al-Imam.

The first speeches of allegiance to the Mahdi, including the speech of Sheikh Hassan Juma Yusuf, the leader of the Fulani and their sheikh in Darfur, on Rabi’ al-Thani 29 1300 AH corresponding to 1880 AD.  The International University of Africa, No. 8, 12/1991 AD, and the letter was a response to the letter sent to him by Imam Muhammad Ahmad al-Mahdi, due to his wide influence between his tribe and the neighboring tribes.

In the famous site of the cave on the island of Aba, on the night of the seventeenth of Ramadan 1301 AH corresponding to 12/8/1881 AD, seven of the men of the Fulani tribe  were martyred with Imam Mahdi, and as it is written inside the cave that the first to carry the Mahdi on the back of his horse were three of  fulani men they are:
Adam Alaiser
and Hussein Gomaa
and Abdullah walad Nafeh.

The Turkish executed the martyr Abdul Basit Abu Janzir, grandson of Sheikh Ashour Muhammad Laden, by hanging to death after he led a resistance movement against them in 1882, and his grave is now called Abu Janzir Square in Khartoum.

As for Karari battle , which witnessed the greatest and most honorable battle waged by the Sudanese people against tyrants, behind her, on the southwestern side, were the barns of some families of fulani, and the outbreak of the battle was in its heart.  Among his grandchildren in Abbasiya Omdurman, as well as Imam Ahmad Kaddah al-Asha, nicknamed "Kaddah of Blood" (when the Caliph Abdullah saw him lying in his blood, he said: "You are a mug of blood today.")
Muhammad Al-Faki Al-Dadaari:
He is Muhammad Al-Faki Al-Dadaari, a Fulani scholar, and one of the students of Sheikh Othman Dan Fodio in Sekto.
It is said that Sheikh Othman Dan Fodio had announced to him that he would be the minister of the awaited Mahdi, who would appear in the sunrise.
It seems that this future reading of the events of history had brewed in his mind, and motivated him to travel to the country of eastern Sudan, (ie, the present Republic of Sudan).
The opinion is likely that he worked as an advisor to Al-Zubayr Basha Rahma, in Darfur, and he is one of the scholars who mediated for him to release Abdullah bin Muhammad Torshin (later Caliph Abdullah), who announced that Al-Zubayr Basha was the expected mahdi.  It seems that this case is one of the cases that documented the connection between the Caliph Abdullah and Al-Faki Al-Dadaari.  Al-Faki Al-Dadaari was one of the first scholars whom Al-Mahdi addressed and urged them to emigrate to Qadir.  In response to this call, Al-Faqi Al-Dadaari joined the ranks of the Mahdist during the revolution against the Turkish rule, and gradually became one of those with firm power and long experience in managing the affairs of the call and the state.  Therefore, we find that he played a pivotal role in installing the Caliph Abdullah Al-Ta'ayshi immediately after the death of Al-Mahdi in Omdurman in 1885 AD.
For more details on the biography of Sheikh Muhammad al-Dadaari and his relationship with the Mahdist, see:
John Henoch and others:
References and sources:
John O. Hunwick,
etal.  "Between Niger and Nile: New Light on the Fulani Mahdist Muhammad Al-Dadari".  Sudanic Africa.  Vol.8, 1997, pp85-108
• Distracting the minds with the biography of the Arab countries and Sudan for Tunisia
The Islamic Empire of Borno by Dr. Ibrahim Toukhan.
Introducing clans and clans to the peoples and tribes of fulani by Alpha Hashem El Foti.
The History of Sudan by Noam Shukair.

2023 Presidency: My Experience Will Count If Elected , Says Amaechi