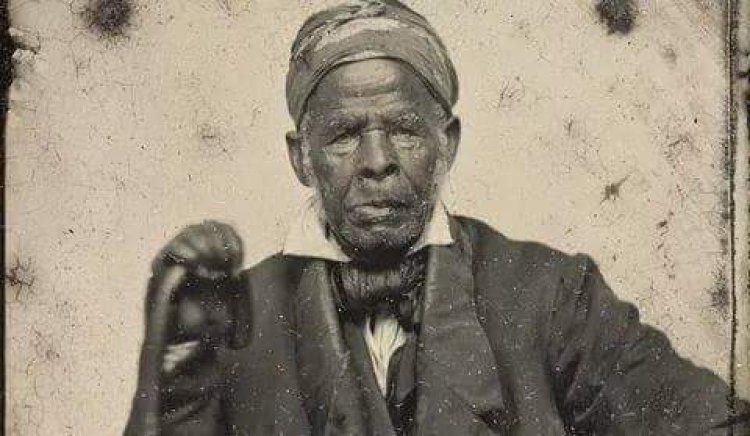 One of the unifying factors of almost all new world Arabic manuscripts written by enslaved African Muslims was their propensity to write down the Opening chapter of the Quran called al-Faatiha.[see figures 1&2]

In the case of Alfa Umar ibn Sayyid, (about whom we were told had abandoned his Islamic faith for the pagan Christian belief of man-worship), the writing of the chapter al-Faatiha could only be evidence of the persistence of faith in the Lord who revealed this most important of Quranic chapters. 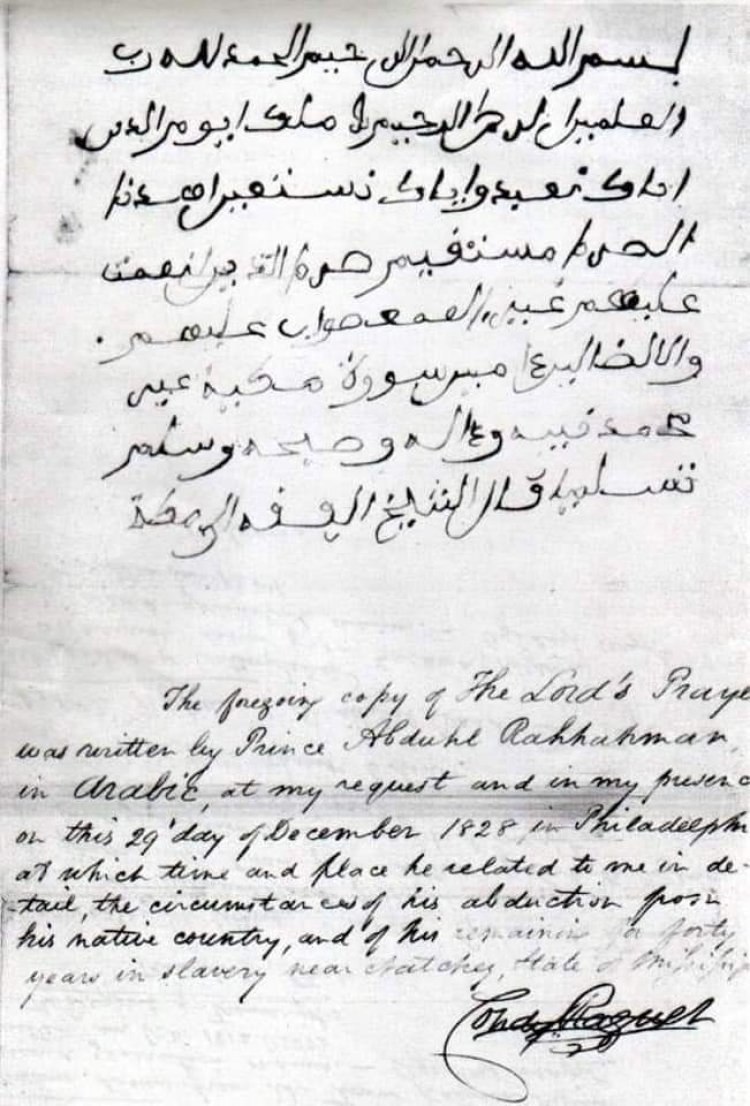 Again, due to the fact that the transmission of learning in the regions in which Umar lived is well known, we can say with certainty that during his twenty five years of intensified study, he had to have read the Tafseer ‘l-Jallalayn. 1

This fundamental text of Qur’anic exegesis was the first and the most renowned tafseer that was transmitted in Futa regions of the bilad’s-sudan. It is important to know that the tafseer (commentary) upon the last verse of the al-Faathiha rendered by the al-Jalalayn and all seminal tafaaseer is the following:

Because Alfa Umar had to have known the classical commentary upon this important chapter, (which is an obligation for every Muslim to know and recite in his prayers) - it goes without saying that his reason for citing it in his Autobiography was to demonstrate his continued adherence to the faith of Islam.

Another tafseer that was famous and in widespread use in the lands of the Turudbe’ was the work of Abdullahi Dan Fodio called Diya ‘t-Ta’weel Fi Ma`ana ‘t-Tanzeel. 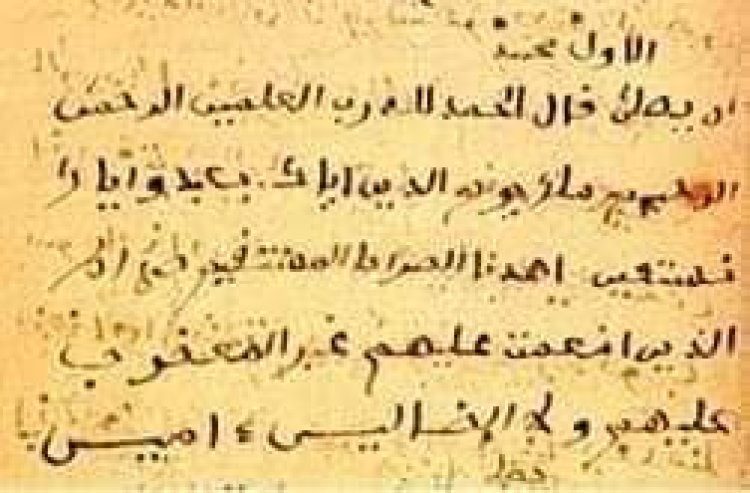 In this text the author adds:

“It is as though Allah is saying ‘There is no anger upon them nor are they astray’. Astray here means to deviate from the straight path intentionally or by mistake. The word astray is intensified with the negative particle لا (nor) in order to separate between the two ways going astray in order that everyone can avoid both of them.

This is because the path of the people of true faith encompasses both knowledge of the truth and acting in accordance with it.

This is due to the fact that whoever knows the truth and neglects acting in accordance with it, deserves anger, in contrast to the one who does not know the truth.

It has been related on the authority of the prophet, may Allah bless him and grant him peace, “Those who have earned divine anger are the Jews. Those who are astray are the Christians’.” 3

It is in this light that the above citation of the al-Faatiha by Umar ibn Sayyid must be understood. Umar demonstrated clearly his continued adherence to the covenant of Abraham through the Way of Muhammad, may Allah bless him and grant him peace. [see fig. 3] 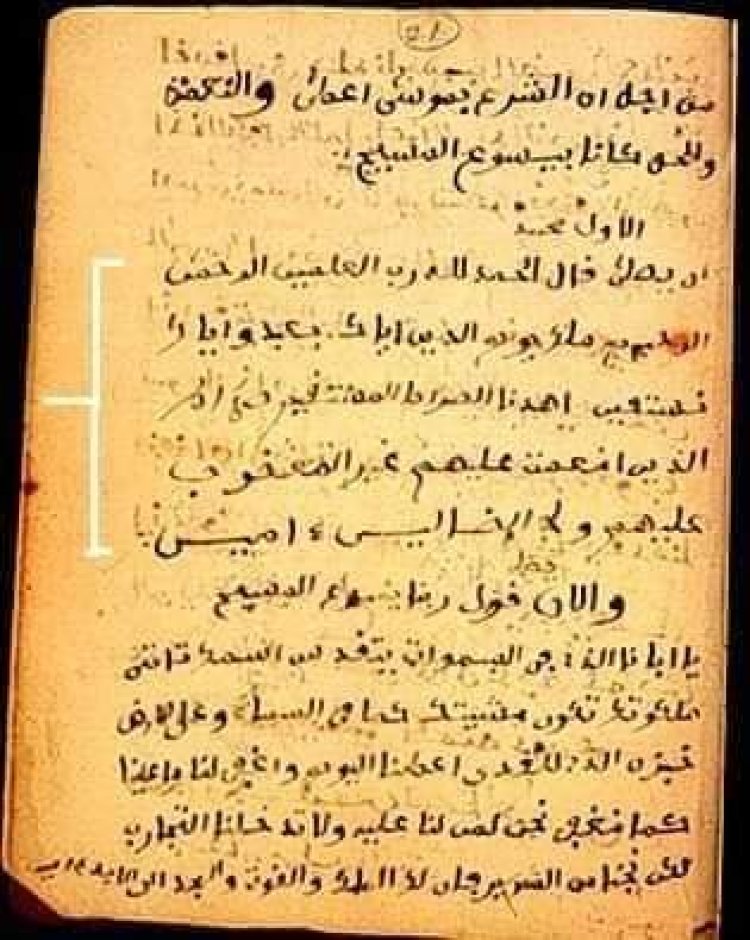 The Anglo-Americans attempted to categorize Umar ibn Sayyid within the confines of their own narrow-minded descriptions. The Anglo-American defined the enslaved African as sub-human lacking any ability to know or define themselves, not to speak of determining their own course. This psychological warfare was conducted at every level of the Anglo American society, even at the constitutional level. 4

Alfa Umar ibn Sayyid had a clear sense of the geopolitical situation that he was in. He knew that the Africans of the coast who captured him were non-Muslims and that the enemies that he had been sold to were European Christians.

Although ‘africanists scholars’ have longed portrayed African Muslims as the key partners with the European slavers in the trans-Atlantic slave trade, Alfa Umar gives us an entirely different picture. He said:

“Truly my residing in my country was by reason of great detriment. The disbelievers seized me unjustly and sold me to the Christians, who purchased me. We sailed a month and a half on the great ocean to the place called Charleston in the language of the Christians.

I fell into the hands of a small, weak and wicked man, who did not fear Allah at all. He could neither read nor did he pray.  I was afraid to remain with a sinful man who had so many sins. Thus, I fled” 5

Perhaps when Alfa Umar spoke of ‘great detriment’ he was speaking of the many wars that were taking place during the period he was seized. During that time the pagan Africans were successful at raiding many centers of the Fulbe, Mandinke, Toucolour and other African Muslims.

1807, the year Alfa Umar was captured, was the same year that the pagans sacked the central religious town of Almamy Abd’l-Qaadir and had him murdered. The period was a period of insecurity and internecine warfare.

Alfa Umar recounts this tumultuous period, and utilized his ability to write in Arabic as a means of defining his own reality and speaking out against his captors. The ability to utilize one’s own language to evoke and define oneself and the enemy constitutes the most essential element in self-determination.

The ability to understand and delineate the inner being and the surrounding universe is what placed mankind over and above the creation. This was the hallmark of Adam and remains the quality of his descendants.

In spite of the fact that in 1807 the U.S. constitution defined Alfa Umar as less than human, he demonstrated his profound humanity through his ability to use his own classical language to tell his own story.

This must be understood when examining any referents utilized by enslaved African Muslims in their writtings. The ethnicity that Alfa Umar was a member, the Turudbe’ Fulani, had a deep sense of who they were, and understood their historical relationship with the Europeans. They were fully aware the role that they and other West African Muslims played in the civilizing of Spanish and Portuguese Europe. 6

The protective historical conscience of Turudbe’ Fulani identity, the inner psychological fortification of Islam, as well as the linguistic security of Arabic, gave them the assurance and ability to create their own referents, and t tell their own story.

Thus, the mere existence of an extremely literate African, which Alfa Umar exemplified, challenged and defied the Anglo-American’s futile attempt to deconstruct Africans and define them. Hence, Alfa Umar cannot be understood through the prism of Anglo-American Christian scrutiny, but through his own ethnocentric frame of reference.

Allen Austin defined this endeavor on the part of Anglo-Americans to ‘redefine’ Umar as a ‘Christian’ as “largely the creation of romantic-white and militant Christian wishful thinking.” 7

The fact that he was ‘owned’ means that he could not define himself, thus he had to be ‘handled’ and ‘packaged’ to suite the Anglo-American image of the good docile slave. An example of this type of historical fallacy is in the following picture painted of Umar:

“The name of the man from whom I obtained this manuscript for you, I believe is Monroe (Umar); …an Arab by birth, of royal blood...He fell into the hands of Gen. Owen, of Wilmington, who…proffered him his freedom, and offered to send him back to his native land. But Monroe (Umar) declined the offer, saying that his friends were probably either destroyed or dispersed and that his condition was much better where he was…He is respected by those who know him, and is a worthy member of the Presbyterian Church.” 8

Not only does the Anglo-American redefine this Turudbe’ Muslim as Christian, but they went further in claiming that he did not desire his own freedom, that he was content to remain under the yoke of the white man, all be it ‘benevolent’.

Not only did the Anglo-Americans  place words in Alfa Umar’s mouth, they also had the audacity to try and disclose what was in his heart, so complete was their ownership of him.

This coincides with their own racist views of Africans and other non-whites, as Lester Scherer said that white tradition: “affirmed that the heathen could legitimately be treated differently from Christians. They could be enslaved for life; and they could be driven harder and fed less.” 9

The opinion that Africans were resigned to slavery and were naturally disposed to it was idea pervasive throughout Europe and the United States. Writing in South Carolina, about three decades after Umar ibn Sayyid was captured, William Harper, who spoke of Africans’ “indifference to personal liberty”.

He raised the question: “Let me ask if this people do not furnish the very material out of which slaves ought to be made, and whether it be not an improving of their condition to make them the slaves of civilized masters.” 10

This kind of thinking induced Anglo-Americans to try and repackage enslaved African Muslims, like Alfa Umar ibn Sayyid as docile, content, and even grateful for their lot as subordinate and as slaves.

This same sentiment is echoed today when an Anglo-American ‘Muslim’ convert once described the Hariteen of Mauritania, as being virtuous and benevolent in their status as second class citizens, as if the enslavement of Africans is natural and benign.

The same attitudes prevail where the ability of the African Muslims to endure their lot as slaves is seen as noble and venerable, but for the Africans to consider revolt and rebellion against enslavement is seen as unnatural. 11

Alfa Umar ibn Sayyid was no exception in this mass self-deception among the Anglo-Americans. Umar’s image as a convert to Christianity was utilized to help advance the myth of African innate inferiority. However, when close examination is made of Alfa Umar’s Autobiography another picture emerges.

Just as Alfa Umar ibn Sayyid refused to allow Anglo Americans to redefine him in their image of an exotic ‘Arab’, likewise he refused to fit securely in this caricature by his secret mentoring of one of the most defiant African freedom fighters in U.S. history – Denmark Vessey.

The fact that this relationship went completely unnoticed by Alfa Umar’s slave masters, or those who prosecuted this African slave revolt, speaks volumes about the Shaykhs intelligence and his mastery of the science of taqiyya (dissimilation).

Perhaps, the Anglo Americans, did not want to see the Shaykh as he was, however, he left glaring evidence for anyone who can read Arabic, that he, like Denmark Vessey and his fellow African freedom fighters, yearned for liberty and victory.

The secrets of journalist M. Séne:Kalidou Koulibaly told me on the phone that…”