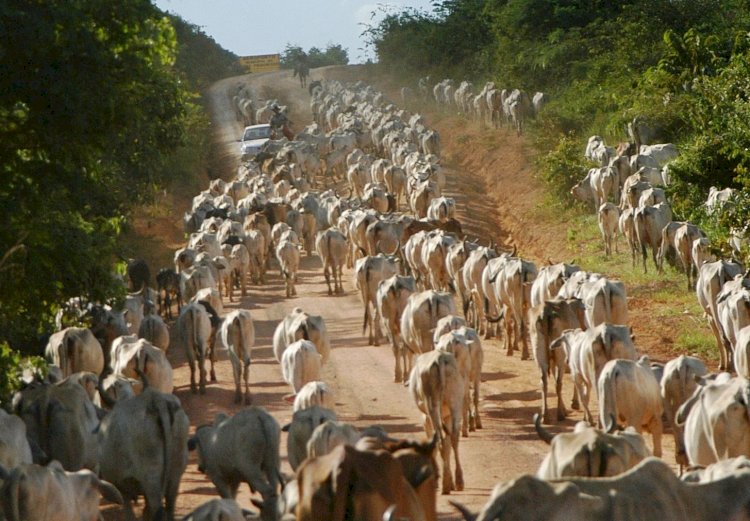 One day, I was on a business trip to Bauchi and a friend asked me to make out a time and inspect a facility that will blow my mind.

He took me to Bauchi Meat Products Company Limited. This facility has installed capacity to process over 1500 cows per day into different products. The bone marrow extraction unit has capacity to supply the pharmaceutical industry with critical raw material for syrups production, the hides and skin section can feed the leather industry while the pooh -pooh can be converted to organic fertilizer. Interestingly, the facility can manufacture corn beef. It was such a mind blowing facility. This facility has 7300 hectares of Galambi Cattle Ranch attached to it.

I was moved by what I saw and that was my motivation to put together a consortium led by a Zimbabwean company that has made fortune in meat processing. My little firm accepted to be the project sponsor and bankrolled all the pre project development expenses required to make a compelling business case.

To take care of the political angle, I got on board a very prominent son of Bauchi who was a close friend of M.A Abubakar (the then Governor). I learnt both men were commissioners under a certain administration in Bauchi and we thought we had nailed the project. After putting together a compelling business case having spent handsomely to get the best consultants to work with us, the real work of endless meetings started.

I was paying for our technical partners to fly in from Zimbabwe whenever meetings were scheduled and trust me, politicians and government officials know how to take you on merry-go-round. My team met with every single government official that mattered in the state starting with a meeting with the Governor who assured us of his support.

We thought the government was serious when they subjected the concessioning process to public procurement protocol and called for other companies to bid for the facility. After this exercise, the folks at Ministry of Commerce confided in us that our consortium won the bid and recommendation was made to the Governor to formally award the concession to the winning consortium.

That was the last we heard. Time will not permit me to tell you all that transpired which taught me a big lesson that we are not serious as a people to advance the cause of this country.

To put it in perspective, our business case was predicated on the Concessionaire providing all the capital required to reactivate the facility. Apart from the Management team to be deployed from Zimbabwe and perhaps the Finance Director who can be appointed by the sponsor, every other manpower required to operate this facility would be sourced locally.

The multiplier effect on the economy of Bauchi is better imagined. The Zimbabweans designed an out-growers program to support local breeders to breed to our specifications while mid-term strategy to reactivate the Galambi Cattle Ranch was part of the plan. We had in-principle off-takers agreement from a firm based in the middle east to buy the organic meat which won't even be sufficient to meet local demand.

That gives you an idea of the opportunities inherent in this project. Not many people know that Bauchi has one of the best airports in Nigeria but such critical infrastructure is only serviced by the Governor's chartered jet. We wanted to use the project to keep the airport busy through evacuation of meat products to the middle east to service the off takers.

The multi million dollar question which the Zimbabweans keep posing and which I don't have answer to is: why didn't the government concession the facility to us or any other concessionaire that bidded for the facility considering that the project was at no cost to the government? Why would that facility still be lying fallow till date? Bauchi is not great in internally generated revenue. This project could have added great value to the state in this regards.

The history of that facility is fascinating. I was told the Premier of Northern Nigeria in the 60s was on an official trip to Botswana and saw this facility and replicated it upon return from the trip. So, this gives you an idea of the age of this facility. However, when the Zimbabwean technical partners did an audit of the facility, they recommended that we retain over 90% of the equipments which are still in top shape with minor automation of some parts to bring it to modern taste.

This goes to show you the kind of "leaders" we have now. It was based on this personal experience that I saw the insincerity of Government 's RUGA project and other associated programmes. Our Northern brothers know that no modern nation can rear cattle under this condition.

So, I am constrained to conclude that this Fulani herdsmen crisis is more political than economic. When I remember how much I lost in the cause of pursuing this project, I am tempted to give up on Nigeria.

I only met one reasonable person in the cause of pursuing this project - Dr. Alqassin Ibrahim who was the MD/CEO of this moribund facility. He pushed with every pint of blood in his system when he saw how committed I was to pull the deal through. I remember presenting a gift to him when he married either his second or third wife and he vehemently rejected the gift. He said he doesn't want it to appear that my gift is an influence on him. He was irrevocably committed to achieving the concessionig of this facility.

Mates, it will shock you that this moribund facility had a CEO, Finance Director, Legal Director etc who reported on duty in the most embarrassingly dilapidated office I have ever seen and draw salary every month.

The case of Nigerian refineries not working and still spending billions in running cost. What an irony called Nigeria?

My two cents is that we have what it takes to turnaround Nigeria. We just need the political will to do the right thing. I am willing and ready to contribute my little quota through entrepreneurship to add value to Nigeria anytime. But sometimes, I ask whether it is worth it dying for Nigeria. May God save us from kleptocratic and wicked leaders.

In The Fight Against Corruption… Chernoh Bah Should Be Seen As A Hero, Not A Villain