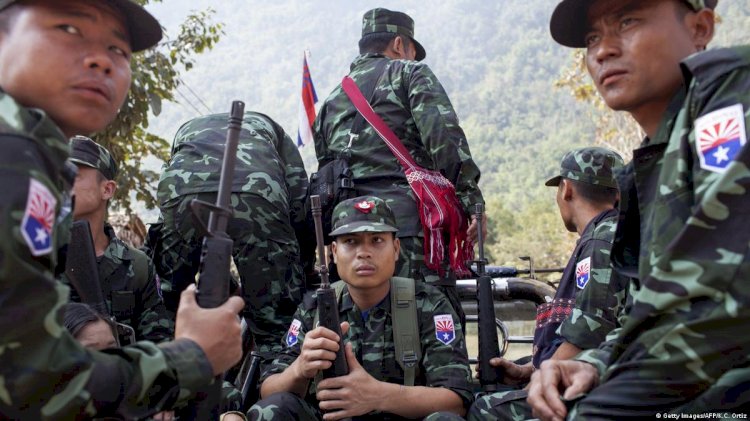 Rebel fighters of the Karen ethnic minority have attacked an outpost of the Myanmar military near the border with Thailand.

“The military members ran away and we don’t know about casualties. But we captured the base,’’ Padoh Saw Taw Nee, head of foreign affairs at the KNU, told dpa.

According to a report by The Irrawaddy newspaper, eyewitnesses saw seven soldiers fleeing into the jungle.

The outpost was reportedly burned down with videos on social media showing flames and smoke rising near the eastern border post Thaw Le Hta, where the river Salween separates Myanmar from Thailand.

After the coup on Feb. 1, the military had repeatedly launched airstrikes on areas with ethnic minorities, including the Karen.

“There are over 24,000 of our Karen civilians in the jungle now because the Myanmar military attacked us with airstrikes,’’ said Padoh Saw Taw Nee.

“They don’t attack us by airstrikes at this moment, but their fighter jets have been flying over the villages everyday and the people dare not go back to their villages,’’ he added.

Some of the armed ethnic groups in Myanmar, which had been fighting for more autonomy for decades, have supported the months-long protests against the military coup.

Thousands of people have already fled to Thailand amid the military’s violent crackdown on the protests.

Mahn Win Khaing Than thanked the leaders who met at Saturday’s summit of the Association of South-East Asian Nations (ASEAN) in Jakarta for its support for Myanmar and its people, while also accusing the group’s actions of being `abstract.’

“ASEAN’s actions regarding Myanmar have remained in the abstract amidst the fear and terror inflicted by the military on its own people,’’ Mahn Win Khaing Than said in a statement.

“Close to 800 have lost their lives since February 2021, and more than 3,000 are under detention, including President U Win Myint and State Counsellor, Aung Sang Suu Kyi.”

The leader of the NUG, which was formed earlier this month, went on to express concern “that any misrepresentation of facts by the military may affect the way in which ASEAN formulates and implements the necessary follow-up actions’’ to resolutions reached in the meeting.

Myanmar, an ASEAN member state, was represented at the summit by junta chief Min Aung Hlaing in his first known trip abroad since the military seized power and ousted the civilian government led by Suu Kyi.

The meeting was closed to the media because of restrictions to prevent the spread of COVID-19.

Shooting In Imo As Gunmen Try To Take Over Hausa Settlement