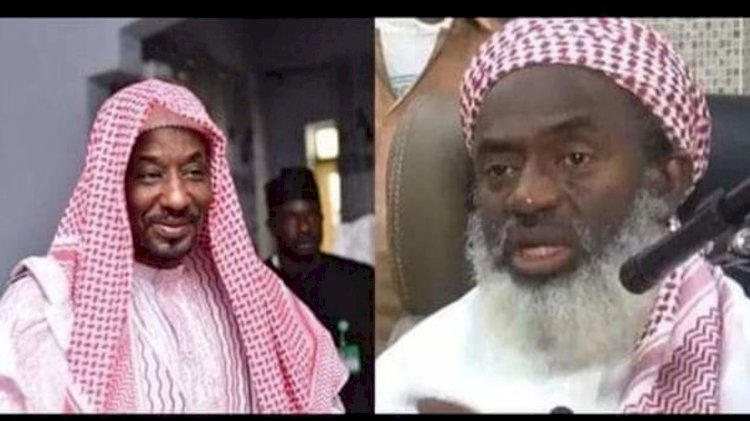 The Popular Islamic scholar, sheikh Abubakar Mahmoud Gumi said the former Emir of kano Sanusi ll and El-zakzaky are leaders of an heretic Islamic sect, and as such God is teaching them some lessons.

According to Gumi, he said Islam does not permit sect, As the teachings of the prophet is what all muslims must abide by.

He said the former Emir and Zakzaky brought the challenges they are facing upon themselves.

Sheikh Gumi on his social media account wrote the following :

1. Sanusi lamido Sanusi vs Ibrahim az-Zakzaki: the spiritual angle and lesson from their nonconformism.

The two suffered incarceration one momentarily thought, for insubdination to worldly powers. Boths are leaders of heretic Islamic sects. Tijjaniya of Nigeria and Shiites of Nigeria. It’s noteworthy that Islam does not recognize sectarian groupings. The nation of Islam is one, under one God, one prophet, one holy book, one tradition (sunnah) and one destiny.

“Surely they who divided their religion into parts and became sects, you have no concern with them in anything; their affair is only with Allah, then He will inform them of what they did.”

“and be not of the polytheists;

Of those who divided their religion and became sects, every sect rejoicing in what they had with them”

This is the pristine Islamic stand against sectarian differences.

“It is not meet for a mortal that Allah should give him the Book and the wisdom and prophethood, then he should say to men: Be my servants rather than Allah’s; but rather (he would say): Be worshippers of the Lord because of your teaching the Book and your reading (it yourselves)…

Every sect that deviates from the mainstream sunnah is engaged in polytheism of Saint worshiping and veneration. The Tijjaniya sects has Ahmad Tijjani of Morocco (d. 1815 AD) and his supposed West African vicegerant Ibrahim Inyass of senegal (d.1975AD) as saints to be venerated beyond the bounds of Shariah while the Shiites consider Ali son Abi Talib (d. 661AD)”and his progeny from one of his sons Alhussain (d. 680AD) as their only rope to spiritual salvation through unIslamic veneration of Saint worshiping.

The pristine Islamic teaching is to take the prophet as the only human to follow as example in the worship and veneration of only one and only God, Allah The exalted.

Now back to the duo. The two sects they each head, believe that each of their respective Saints can be approached in their graves for intercession on worldly and spiritual matters. But this time, futunately or unfortunately their saints heroes failed them in the hour of need. They did not come to their salvation against yet another feeble worldly temporal power.

I sincerely hope they now come to understand why Allah has brought to them lessons to themselves and will desist from misleading their fellow Nigerian Muslims against this heretic sectarian Saint worshiping and teach people to unite under one sunnah of absolute submission to the worship and veneration of Allah only, as practiced by the noble prophet Muhammad and transmitted through the successive generations of the pious Salaf.

2. In fairness, Az-zakzaki, should also be released from his detention. Fairness is what Islam is known to entrench as a cardinal principle of justice.

*O you who believe! be maintainers of justice, bearers of witness of Allah’s sake, though it may be against your own selves or (your) parents or near relatives; if he be rich or poor, Allah is nearer to them both in compassion; therefore do not follow (your) low desires, lest you deviate; and if you swerve or turn aside, then surely Allah is aware of what you do.”

They are both Nigerians and therefore should enjoy the same treatment under the law and court rulings.

Peace and Blessing of Allah be upon His prophet, his household, his companions, his followers until the last day.

May Allah guide us to the straight path and bring His blessings, unity and prosperity to our country. Amin