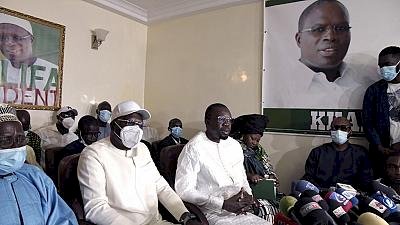 About 20 opposition leaders on Thursday launched a large coalition for local elections slated for 23rd January 2022. Baptised “Yewwi Askan Wi” meaning, liberate the people, in Wolof, the coalition was unveiled in Dakar.

Opposition leaders including Khalifa Sall, Ousmane Sonko through Aida Mbodj, Moustapha Guirassy and Malick Gackou signed the charter “Against Any Compromise or Concession With Macky Sall,” according to the daily EnQuête.

They intend to form a grand coalition and contest the local and legislative elections. The next presidential election is set for 2024 and Macky Sall, in power since 2012, has not stated clearly if he will run again.

“The problems will not be lacking, because we are politicians. There will be clashes of ambitions but the challenge to get there is there, not for us, but for Senegal,” said Moussa Tine, a close ally of the former mayor of Dakar Khalifa Sall, speaking on behalf of the coalition leaders.

“What appeals to us is to avoid the formation of two coalitions. We must stand together to confront the president of the presidential coalition, Macky Sall,” he said.

However, some opposition groups have distanced themselves from this coalition. This is the case of the Senegalese Democratic Party (PDS) of former president Abdoulaye Wade and his son Karim who has been in exile since 2016 in Qatar.

In a statement issued the day before the launch of the alliance, PDS said it was surprised by the circulation of the charter and announcing its creation. “Without being officially informed, the PDS has learned that a signing ceremony is scheduled for this Thursday, while until then points of disagreement remain,” said PDS, denouncing in passing the “shadow games” and “unnecessary subterfuge” of Ousmane Sonko and co.

According to political science professor Moussa Diaw, these demarcations will weaken the opposition, which “shows the inability to overcome the contradictions between leaders’ egos, personal ambitions and special interests.”

Furthermore, he told national daily Le Soleil that it is “not small groups that will solve the problem. These parties have media leaders, but they lack a base and they have not shown a capacity to mobilise.”

However, his counterpart Jean-Charles Biagui believes that Ousmane Sonko’s Pastef, the Parti de l’unité et du rassemblement of religious leader Mustapha Sy and Khalifa Sall’s Taxawu Senegal “are probably the three most significant opposition [parties or movements] along with PDS,” judging from the results of the last elections.

Reps 2023:A New down Mayor-Balwa,Jada,Ganye and Tounge...