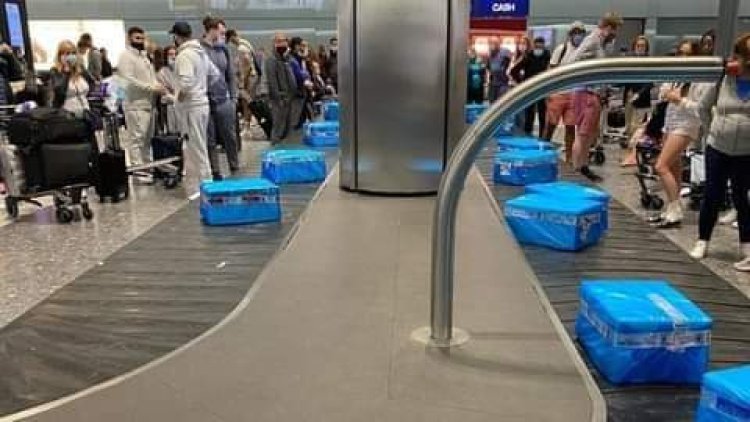 British Airways passengers have been left "baffled" after crates of frozen fish arrived instead of their luggage.

Becca Braunholtz, from Sherborne, Dorset, said the boxes of sea bass and sea bream were delivered to Terminal 5 of Heathrow Airport on Monday.

She landed just after 22:00 GMT following a family holiday in Cyprus.

British Airways said it was reuniting customers with their bags after realising "something fishy was going on".

Mrs Braunholtz had flown from Larnaca with her husband and two children, aged 11 and seven.

She said when they arrived at Terminal 5 and saw the frozen fish rotating on the conveyor belt "it was just the weirdest thing".

She added some passengers were "irate" at the situation.

"We thought our luggage was in the second wave of deliveries but it was just box after box of fish," she continued.

"Everybody was being quite British and polite about it but when more and more boxes started going round we all started to suspect something wasn't right."

Mrs Braunholtz believes there were at least 100 boxes of frozen fish on the conveyor belt, all with stickers for JFK Airport in the US.

She said when she confronted British Airways staff about the issue they were "perplexed" and did not know how it had happened.

"We just can't fathom why, at some point, one of the people loading these boxes of fish didn't think 'this can't be right for Terminal 5'... it's baffling," she added.

Eventually passengers without their luggage were given claim forms and advised to go home.

The family has since been contacted by British Airways and told their luggage would be returned later on Wednesday.

In a statement, the airline apologised and said most passengers on the flight received their bags as normal.

"We've apologised to our customers and we have been reuniting them with their luggage after realising that something fishy was going on," it added.
Source: BBC

I Am Responsible For The Removal Of Uche Secondus As PDP Chairman – Governor Wike...