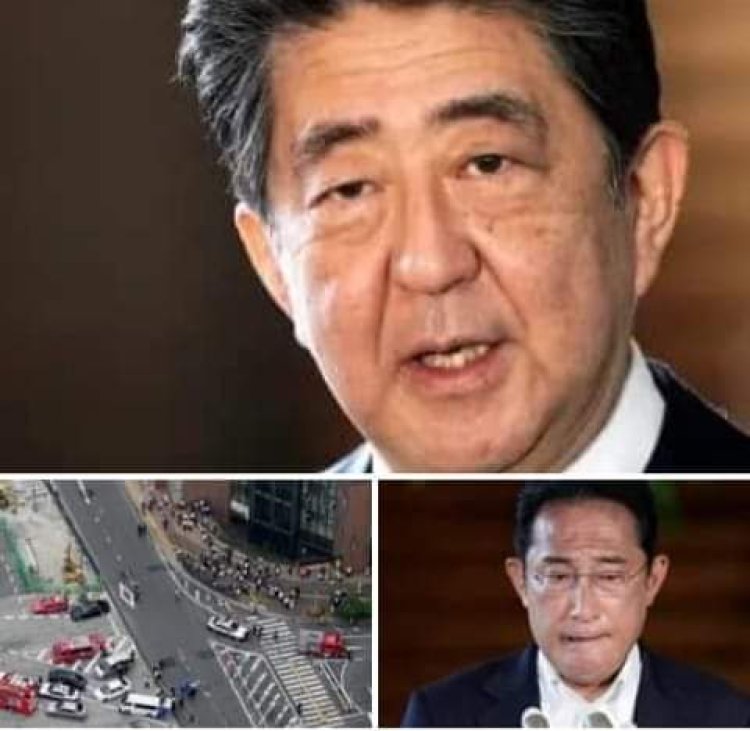 Japan's former premier Shinzo Abe has died after he was shot while delivering a speech, according to local reports.

Officials confirmed his death on Friday several hours after he was airlifted to hospital fighting for his life, according to NHK public broadcaster.

Earlier, Prime Minister Fumio Kishida confirmed he was in a "severe condition" and that he was "praying" for his survival.

Mr Abe, 67, was gunned down while speaking to crowds outside a train station in the western Japanese city of Nara on Friday.

He was not breathing and his heart stopped as he went into cardiac arrest while being airlifted to Nara Prefectural University Hospital, said officials.

NHK aired dramatic footage showing Mr Abe collapsing on the street, bleeding and holding his chest as several security guards run towards him.

Security guards are seen leaping on top of a man in a grey shirt wearing a face mask who lies face down on the pavement.

A double-barrelled device that appears to be a handmade gun is then seen on the ground.

Police confirmed they arrested Tetsuya Yamagami, 41, on suspicion of attempted murder at the scene of the shooting.

NHK reported that he served in the Maritime Self-Defense Force for three years in the 2000s.

He reportedly admitted to police that he shot Mr Abe and wanted to kill him but did not reveal his motive.

Mr Kishida said doctors were doing everything they could to save his colleague as he condemned the attack as "barbaric" and an "unforgiveable" attack on Japan's democracy.

“I’m praying for former prime minister Abe’s survival from the bottom of my heart," said Mr Kishida, who belongs to the same political party as Mr Abe, earlier.

“I use the harshest words to condemn (the act),” he added as he struggled to control his emotions.

The attack has sent shockwaves across the world. Japan is considered one of the world’s safest countries with virtually no gun crime due to incredibly strict private ownership laws.

He said the government planned to review security in place, but added that Mr Abe had the highest protection.

Mr Abe, an arch-conservative and one of the country's most divisive figures, was Japan’s longest-serving prime minister and has held the position twice.

He stepped down in 2020 after the return of chronic stomach condition, ulcerative colitis, which he's had since he was a teenager.

The former leader had still been influential in the governing Liberal Democratic Party and heads its largest faction, Seiwakai.

Elections for Japan's upper house, the less powerful chamber of its parliament, are on Sunday.

World leaders have expressed shock and anger at the shooting - the likes of which are almost unheard of in Japan.

Prime Minister Boris Johnson said he was "utterly appalled and saddened to hear about the despicable attack on Shinzo Abe".

Former British PM David Cameron also tweeted that he was "most alarmed to hear the terrible news from Japan this morning regarding the appalling attack on my friend and former colleague Shinzo Abe.

"Sending him and his family my thoughts and prayers at this worrying time."

Secretary of State Anthony Blinken said the US was “deeply saddened and deeply concerned" over the attempted killing of Mr Abe.

“We don’t know his condition. We do know that apparently he’s been shot. Our thoughts, our prayers are with him, with his family, with the people of Japan. This is a very, very sad moment," he said.

Former US President Donald Trump said the attack was devastating. He described Mr Abe as a “truly great man and leader” and said he “was a true friend of mine and, much more importantly, America."

“This is a tremendous blow to the wonderful people of Japan, who loved and admired him so much. We are all praying for Shinzo and his beautiful family!” Trump said on his social media app.

2023: Tinubu Has Agreed To Pick A Muslim Running Mate – Ganduje