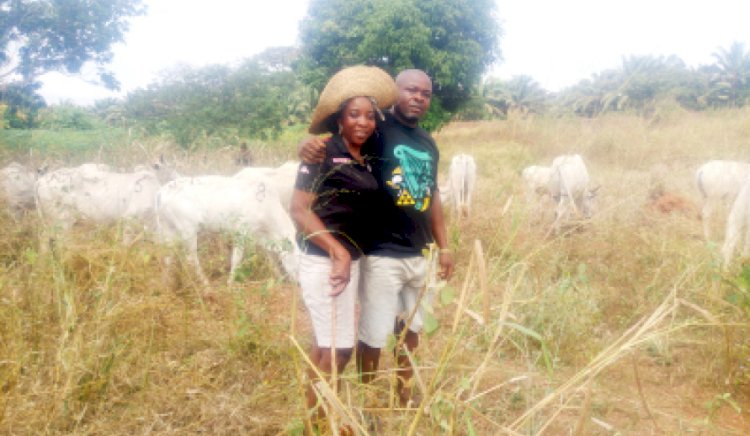 Armed with a stick and spotting a short brown jean, black T-shirt, sneakers and a big native hat, the first known Igbo herdswoman, Mrs. Ekene Obaye, an indigene of Nguru Nsukka in Nsukka Local Government Area of Enugu State, gave a hot chase to one of her cows as the animal strayed into a cassava farm. Daring the cow, she held its right hind leg and began dragging it backwards out of the farm. It was quite a struggle causing a mild drama before her husband, Mr. Patrick Obaye, also a herdsman, intervened.

Mrs. Obaye told Daily Trust that, “We have farms and I would not like my cows to destroy anybody’s farm. But this particular cow likes eating cassava leaves. It doesn’t get tired of eating them,” and she continued to herd the cows numbering over 20.

A graduate of Archeology and Tourism from the University of Nigeria Nsukka (UNN), Mrs. Obaye said lack of a paying job and the involvement of her husband in a December, 2019, road accident that almost claimed his life forced her into the cattle rearing business, although she admitted that her husband’s family had been known for cattle rearing long before she married into the family.

The 38-year-old mother of two said, “On returning home after treatment, Patrick managed to attend to his cows, but the impact of the head injury was so much that he once collapsed in the bush and almost died. He was the only person rearing the cows then. So I took up the challenge because it was as if the business was going to die, and I decided to continue from where he stopped until when he recovers very well and comes back to herding.”

How does she feel joining a business dominated by men? Mrs. Obaye, fondly called Nwanyi N’achi Ehi (herdswoman), told our reporter that, “I feel very OK doing it because it is very lucrative. The job is sweet for me. I don’t need to look for another job because I already have one.”

Almost daily, the dark-skinned lady with a pointed nose like the Fulani walks long distances in company of her cows; most times trekking not less than 36 kilometres in the bush.

She explained that, “I can move from here to Obimo; which is about 36 kilometres going. That means 36 kilometres multiplied by two will give you 72 kilometres; that is going and coming back. At times, I cover more than that. Sometimes we move to Lejja because Lejja and Obimo have a common boundary.”

Mrs. Obanye recalled her first day on duty as a herder thus, “The first day I entered the bush with many cows, the natives rushed out with their cutlasses, screaming “Nwayi Fulani n’achi efi!” That is a Fulani woman who is rearing cows. They were restive so I spoke Igbo and introduced myself as the wife of Patrick Obaye. They calmed down and showed some excitement at a young Igbo woman who is not afraid of cows. They encouraged me after I told them what happened to my husband. They said they knew my husband but didn’t know me as one who could herd cows so fearlessly.”

How does Mrs. Obaye strike a balance between business and taking care of her family? The herdswoman said the cow-rearing trade did not stop her from taking care of her children’s schooling because she and her husband introduced “division of labour” in their domestic affairs. On the day it is her turn to go on a school run, the husband will remain in the bush to watch over the cows, and when it is her turn to remain in the bush with the animals, her husband will do the school run.

She explained that, “There is understanding between us. Where there is mutual understanding, there hardly can be quarrel. The children sometimes follow me to herd the cows. During weekends and holidays, all of us go together. The kids have their own duty as well. They fetch water for the cows.”

Cows normally stray into farms and cause destruction, so how does she manage such situations? She said, “There are some problems that don’t need money to settle. Such problems may need just your politeness and manner of approach to the owners of the farms,” adding that the method had been working well for her.

She said her major challenge was how to raise funds and build a quality ranch for her cattle, and that the ranch would also serve as a training centre for women who intended to go into the cow herding business, besides serving as a tourist centre.

She further said, “If the Gov. Ifeanyi Ugwuanyi-led Enugu State Government can sponsor me with about N20 million and above, I will be able to establish a cattle ranch and that will stop the movement of my cows from one place to the other. We have a lot of land here in Nguru.”

“Therefore, ranching is the permanent solution. If everyone should ranch his or her cows, trouble and fighting will stop.”

Is Mrs. Obaye not afraid of cows or has she not heard of people being killed by cows that turn violent? She said she was friendly with her animals and even gave an insight into things that could provoke cows thus: “Cows are just like other domestic animals; the way you train them is the way they behave. Even your children, when you train them with care, they will be very close to you. But if you scare them, they will like to keep away from you. The same thing is applicable to domestic animals. I can’t be afraid of my cows and they will not harm me just as I will not hurt them. They are very friendly with me.

“However, the only thing that provokes them is crowd. Also, loud noise provokes them quite a lot. When they are face to face with a crowd, they become tensed and aggressive. They will think they are going to be attacked.”

Mrs. Ekene who travels to Mubi in Adamawa and to Katsina with her husband to get their supply of both native and high breed cows, said she had 28 cows under her command. However, she added that, “Even if I am given over 1,000 cows, I will be able to control them without any one missing. I can handle them very well. I have just this stick. I don’t carry weapons. And my cows follow me wherever I go.”

On losses experienced in the business, Mr. Obaye volunteered and told our correspondent that, “A major challenge is when the cows fall sick and die. That means the money used in buying them and all the effort put in would be wasted. That means a big loss.”

Mr. Obaye threw more light on the secret of their success in the business, saying, “The two kids we have – after school and during holidays – move with us. In the morning, if we want to go to our farm, all of us will go. The first child is Nnamdi Obaye (15) while the second is Kamsiyochukwu (nine). We want them to see the source of our income with which we train them in school. When our kids know the source of our income, I believe when they are making their demands, they won’t like to demand things that we can’t afford.”

“In Nguru Nsukka we have enough land. Even if we demand from our community 30 hectares to use for ranching, the community will donate it, because I am one of the cabinet members of the Igwe, Igwe Nosike Linus Obaye, our traditional ruler.”