BREAKING Guinea:Cellou Dalein:"There is no question of accepting the false results that the CENI is proclaiming" 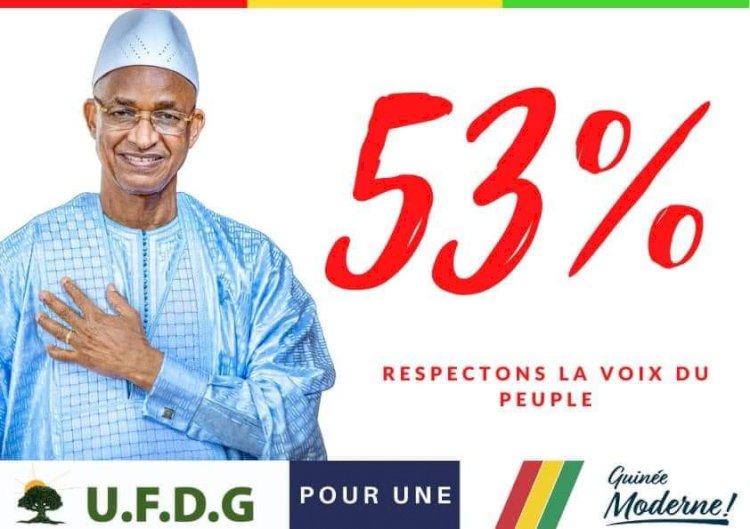 Cellou Dalein Diallo, the challenger to the outgoing head of state in the recent presidential election in Guinea, on Friday ruled out recognizing the results published by the body in charge of the elections and said he was open to international mediation to get out of the unrest that  shake the country.

`` It is out of the question to accept the false results that the Ceni (Independent National Electoral Commission) is proclaiming in favor of Alpha Condé, '' the outgoing president, who is seeking a controversial third term, said Mr.  Diallo in a telephone interview with AFP.

The CENI, responsible for organizing the presidential election last Sunday, has been publishing district-by-district results since Tuesday.  On Thursday evening, she communicated the results of 37 of the 38 national constituencies, leaving no doubt what the outcome would be for the official bodies.

According to the addition of these results, Mr. Condé wins with more than 2.4 million votes out of about 3.9 million votes cast, far behind Mr. Diallo (about 1.2 million votes) and s  'ensuring an absolute majority and re-election from the first round.  Mr Diallo unilaterally declared himself the winner on Monday based on the results reported by his supporters.  He accuses the power of falsifying the results.  The tensions that preceded the vote for months escalated after the vote.  Conakry and other cities are embroiled in deadly clashes between young Diallo supporters and law enforcement, and no end is in sight.

Mr. Diallo, whose home is surrounded by security forces and who says he cannot get out, said he was alarmed at the risk that Condé’s actions could give an ethnic twist to the crisis.

“We are attacking the shops of people of the same ethnicity as me (the Peul), these people are helpless.  Since Alpha took office (in 2010), we have died at 220.  You don't have any activists from his party, ’he said.  Condé, Malinké, constantly defends himself against any communitarian policy.

Community affiliations are an important political factor, the Malinké recognizing themselves mainly in the party of Mr. Condé, the Peul in that of Mr. Diallo.  The two groups represent well over half of the population.  Asked about the means of a way out of the crisis, Mr. Diallo said he was not "opposed to international mediation", suggesting that it was a rare recourse as positions are so frozen.

His own camp cannot hope in Guinean bodies to challenge the results, "Alpha Condé having completely subjugated the Ceni and the Constitutional Court," he said.  “And we know that for nothing in the world Alpha Condé is not going to give up his third term on his own.  It’s a matter of life and death for him, ”he added.

The opposition to which he belongs has toujours ’always called on ECOWAS (Community of West African States) and the African Union to organize a political dialogue in Guinea.  But Alpha Condé never wanted dialogue, "Diallo said.